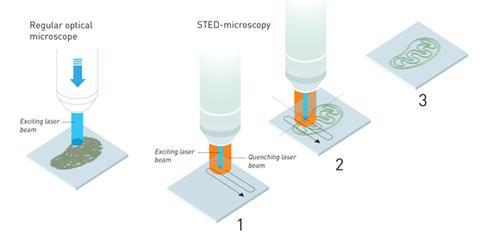 The 2014 chemistry Nobel prize has been given to three pioneers of biomedical imaging, whose work has enabled nanoscale features within cells to be captured in exquisite detail. Eric Betzig of Howard Hughes Medical Institute, US, Stefan Hell of the Max Planck Institute for Biophysical Chemistry, Germany, and WE Moerner of Stanford University, US, will share the prize for ‘the development of super-resolved fluorescence microscopy’.

The techniques they developed enabled extremely high resolution images to be produced using optical microscopy. Their work circumvented the problem of the ‘diffraction limit’ – the inability of light microscopy to distinguish between structures smaller than half the wavelength of visible light or about 200nm. This advance allowed nanoscale structures – including individual molecules – to be visualised within cells while they are still alive, something that isn’t possible with techniques such as electron microscopy.

‘Most of the processes in chemistry and biochemistry take place at length scales that are much smaller [than the wavelength of light],’ said Sven Lidin, of the chemistry Nobel prize committee, speaking at the announcement. ‘The work of the laureates has made it possible to study molecular processes in real time.’ 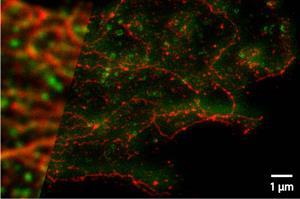 Two-colour STED image of a malignant brain tumour. The blurred region on the left is without resolution correction

In 2000, Hell’s group at the Max Planck Institute developed Stimulated Emission Depletion (STED) to produce much higher quality light microscopy images. STED uses one laser to excited fluorescent molecules that have been introduced into a sample to help visualise it. A second laser is then used to quench the fluorescence of all but a tiny nanometre-sized area at the centre of the two lasers. By scanning the sample with these lasers, a single nanometre-wide strip at a time, a much higher resolution picture of structures like cell’s organelles can be built up, as the light from the other fluorescent molecules that would create a fuzzier picture is cancelled out. 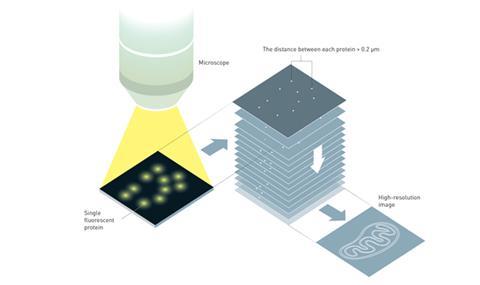 In the years since, these imaging tools have enabled molecular biologists to track the movement of signalling molecules or disease markers within individual cells, for example mapping the molecular changes within an individual nerve cell during learning.

Speaking by telephone at the announcement, Hell told reporters he was ‘totally surprised’ to have received the award, and spoke about some of the challenges during the early stages of his research. ‘The scientific community wasn’t very receptive to the idea of overcoming the diffraction barrier,’ he said, ‘but I realised that you do not overcome the diffraction barrier by changing the waves of light, but by playing with the molecules. That’s why I was so confident and kept on going despite all the issues and problems that kept on coming up in the interim.’

‘Betzig, Hell and Moerner’s work to improve the resolution of traditional light microscopy has enabled scientists to bring their understanding of physiological processes into much sharper focus,’ said Dominic Tildesley, president of the Royal Society of Chemistry. He adds that the techniques they developed are ‘revealing whole new levels of understanding as to what is going on in the human body down to the nanoscale’.

Steven Lee from the University of Cambridge, UK, who was a postdoctoral researcher in Moerner’s lab at Stanford, thinks the news is ‘outstanding’. ‘These exciting discoveries have emerged through painstaking years of research by physical scientists trying to better understand how light interacts with matter at a fundamental level,’ he tells Chemistry World. ‘I was lucky enough to work with W E Moerner – his curious and passionate approach to science is an inspiration to us all.’