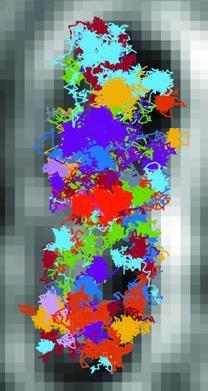 Minflux was used to track the movement of a ribosomal protein subunit in a living E. coli cell

Individual molecules in living cells that are separated by just 1nm can now be routinely imaged for the first time thanks to a new super-resolution fluorescent microscopy technique developed by German researchers. The method could bring fundamental insights to cell biology and help scientists understand how proteins fold and interact in unprecedented detail.

Minflux (minimal emission fluxes) produces images 100 times sharper than conventional light microscopy and brings a 20-fold improvement on the two existing super-resolution fluorescent microscopy techniques – Sted and Storm/Palm. These can only routinely attain 20 to 30nm resolution – remarkable feats that bypass the diffraction limit of light to take microscopy into the nanometre realm, for which their respective creators shared the 2014 chemistry Nobel prize.

One of the co-recipients of the prize was Stefan Hell, who developed Sted, and it is his lab at the Max Planck Institute in Göttingen that’s behind Minflux. ‘This is another excellent publication out of the Hell lab,’ says Steven Lee at the University of Cambridge, UK. ‘What’s exciting about this work is that the two existing techniques are combined in a really innovative way.’

Sted and Palm/Storm both work by introducing fluorescent molecules into a sample and then sequentially turning neighbouring fluorophores ‘on’ and ‘off’. They differ in that Sted creates super-resolution images using a laser with a doughnut-shaped beam in conjunction with another directed at the doughnut’s centre. The fluorophores in the ‘doughnut’ region are deactivated while the other laser activates the fluorescent tags at the doughnut’s centre with multiple snapshots taken as the lasers scan across the sample to build-up an image. Conversely, Palm/Storm uses a laser to excite fluorescent molecules at random across a sample. These fluorophores eventually deactivate over time and then another snapshot can be taken by activating different molecules that have not been quenched. Putting many of these images together and overlaying them enables a precise picture to be built-up but a drawback is that it requires the emission of many photons to precisely locate each fluorescent marker.

Minflux combines these two approaches by randomly switching individual molecules on and off as with Palm/Storm, while the exact positions of the molecules are determined using a doughnut-shaped laser beam similar to that in Sted. In contrast to Sted, however, the doughnut beam excites rather than quenches fluorescence. By scanning the doughnut beam across a sample changes in the strength of a marker’s fluorescence can be recorded to localise it. ‘If the molecule is on the ring, it will glow; if it is exactly at the dark centre, it will not glow but one has found its exact position,’ explains Hell.

The result is that localisation, a key requirement for super-resolution imaging, can be achieved with far fewer emitted photons and much faster than in other methods. This ultimately allows Minflux to routinely attain nanometre resolutions. Demonstrating the technique, the team were able to resolve arrays of single fluorescent molecules attached to DNA origami at 6nm intervals and filmed the movement pattern of two different 30S ribosomes responsible for protein synthesis in a living Escherichia coli bacterium. ‘These are exciting times for super-resolution imaging in general and we hope to see how these technical tools will be transferred and adopted by the biological community to address the most important questions in biomedicine,’ Lee adds.