Chemists have isolated a gold atom in a super-cooled liquid helium nanoreactor to create a single atom catalyst that avoids surface interactions. The gold is held in a van der Waals complex with the reactant, in this case a diol molecule. Using a combination of mass spectrometry and theoretical calculations, the team has unpicked how gold catalyses a reaction that splits the diol in two.

Single atom catalysts are usually bound to a surface. In this case, van der Waals forces loosely hold the gold atom to the diol molecule, leaving it free from any unwanted surface interactions. ‘From a quantum chemical point of view, the involvement of a surface can significantly complicate mechanistic studies. The surface effect is hard to predict because it is environment-dependent,’ says Shengfu Yang from the University of Leicester, UK, who led the work with Jinlong Yang from the University of Science and Technology of China. 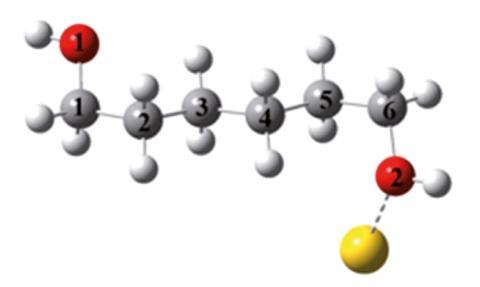 ‘The most interesting aspect for me was the experimental approach to place one gold atom inside a helium droplet, and to perform the reaction there,’ comments Gareth Parkinson, an expert in surface science and single atom catalysis at Vienna University of Technology, Austria. ‘Obviously, this system is very different to regular single atom catalysis because there is no support. In most cases, bonding to the support changes the properties of the metal atoms, and the combination is responsible for catalytic activity.’ By removing all other influences, the group have unveiled the direct effect of the gold atom on the dissociation reaction.

On taking a theoretical look at the system, Yang says ‘we found that all of the carbon–carbon bonds in diol–gold complex cations are significantly strengthened and both carbon–oxygen bonds are weakened. As a result, cleavage of carbon–oxygen bonds became preferential, leading to the formation of C2H4+.’ Experimentally, highly selective formation of the C2H4+ ion in a mass spectrometer confirmed the mechanism.

Yang ends, ‘I hope that this can lead to a general understanding of catalysis at the molecular level, and ultimately, we can develop high-performance catalysts by design rather than cooking.’