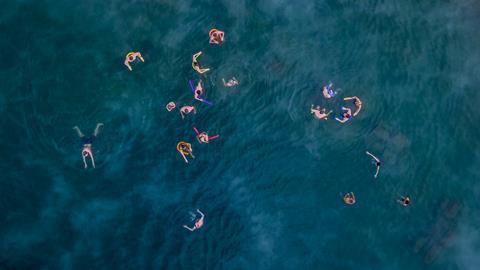 Half of Tian Huang’s time as a postdoctoral researcher at the Institute for Basic Science (IBS) in Ulsan, South Korea has been spent ‘kind-of fighting with others’, she says. In a nanomotor mini-talk online meeting in November 2021, Huang was discussing her work in Steve Granick’s team on ‘boosted diffusion’, and the response to it. Other groups have disputed the 2020 finding, published in Science, that some organic chemistry reactions can enhance the motion of molecules involved.1 ‘These debates can help us understand more about the question,’ Huang says during the nanomotor mini talk – but she and her colleagues stand behind the central conclusions.

‘It’s a gorgeous scientific problem, and it’s a huge puzzle,’ Granick tells Chemistry World. He highlights that his team started not expecting the result it found, so has already changed its outlook once. ‘If it’s wrong, it’s wrong. But we worked as hard as anyone, I think, to find a mistake.’

Starting in 2010, experiments have suggested that reactions can make fluorescently-labelled enzymes move faster than random collisions in Brownian motion alone. If molecules could become ‘swimmers’ like this, it might help drive drug compounds towards their targets, for example. Yet the phenomenon remains controversial, with other researchers publishing findings that point out flaws.

In enhanced diffusion catalyst C is proposed to convert species A to B while surrounded by green solvent molecules. The energy released during the reaction has been claimed to lead to increased (active) diffusion of all species, including solvent and reactant

Seeking to finally settle the argument Granick’s team member Huan Wang, who is now at Peking University in Beijing, China, applied diffusion NMR spectroscopy to the problem. Rather than disprove the phenomenon, in 2020 the researchers found support for it in some organic bimolecular reactions. Most dramatically, Wang reported an increase of up to 60% in the diffusion coefficient of alkyne molecule participating in a copper-catalysed click cycloaddition with an azide.

Lucy Fillbrook, a postgraduate researcher at the University of New South Wales (UNSW) in Sydney, Australia, was excited to try to reproduce the findings and look at different systems. ‘Then as we were doing it, it didn’t turn out quite as exciting,’ she says. As part of Jon Beves’ team, Fillbrook saw no enhanced mobility. To understand why, the team focused on diffusion NMR, working with William S Price from nearby Western Sydney University, who wrote a textbook about such studies.

Jan-Philipp Günther, Günter Majer and Peer Fischer at the Max Planck Institute for Intelligent Systems in Stuttgart, Germany, likewise saw no enhanced mobility in click cycloadditions. In fact, the molecules in their diffusion NMR experiments were slowing down, their diffusion coefficients falling. The German researchers contacted Price to discuss the results, who connected the groups.

Diffusion NMR uses magnetic field pulses with gradients in their field strength. The first pulse is followed after a few milliseconds by an exact counteracting pulse. ‘If no molecule moves, they should perfectly cancel each other out,’ Beves explains. If a molecule moves during the measurement, the intensity of the NMR signal will decrease proportional to the distance the molecule has moved.

Many other factors can change signal strength, however. Claiming or disproving enhanced diffusion requires carefully accounting for them all. One common signal-changing factor is the reagent concentration, which inevitably changes during a reaction. Less obviously, the copper catalyst’s oxidation changes during the click reaction, which might influence the signal strength. That’s because the copper oxidation states have different magnetic behaviours. Applying magnetic field gradients in a different order would eliminate any copper problems, however – something the team in South Korea hadn’t done.

Together, the German and Australian groups wrote a comment on the 2020 Science paper stating that boosted diffusion is an artefact, which was published in January 2021. Granick’s team promptly followed up with its own response to the comment, saying that the order in which field gradients were applied made no difference to the experiments done in their laboratory. They argued that this was because they had designed their experiment with a reaction that went so slowly that any concentration changes should have little impact on the NMR signals. Granick likens this to taking photos of people running and walking slowly – you get a crisper picture when your subject is going slowly.

That started a running debate between the groups. In March 2021, Wang, Huang and Granick again published further insights into the NMR technique they used in a Journal of Physical Chemistry Letters paper.2 In it, they say that magnetic field gradients should have had no impact because the concentrations of the different oxidation states of copper stayed constant during their reaction.

Meanwhile, the German team had been wondering why the diffusion coefficient fell by more than reordering magnetic field gradients alone could account for. Working with the Australian team, in June 2021, they put forward five different explanations in a comment on the IBS team’s March 2021 Journal of Physical Chemistry Letters paper.

Perhaps inevitably, by this time relations between the groups had become fraught. Each had made their NMR data available in public repositories for anyone, including their competitors, to analyse. So, promptly replying to the comment in the Journal of Physical Chemistry Letters, the Korea-based researchers made their frustrations known. They reanalysed the German and Australian groups’ data, failing to find any problems from the copper nucleus in the NMR magnetic field gradients used. Instead, Wang and colleagues consider the data to agree with their own. ‘We do not understand why assertions in the authors’ first comment on this subject are not supported by their own data,’ they wrote.

Meanwhile, the German and Australian teams joined with Daniel O’Leary at Pomona College and Hal Van Ryswyk at Harvey Mudd College, both in Claremont, California. Both also dispute the conclusions of the original Science study. In December 2021, they published a Journal of the American Chemical Society paper together, showing that the alkyne’s diffusion coefficient actually fell by about 20% when bound to copper.4 Meanwhile, the azide’s diffusion coefficient stayed roughly constant, declining slightly after two and a half hours of reaction.

Teams at the Max Planck Institutes for Dynamics and Self-Organisation and the Institute for Biophysical Chemistry in Göttingen and Heinrich Heine University in Düsseldorf, Germany, then entered the debate. In a paper published in January 2022, Nasrollah Rezaei-Ghaleh and Ramin Golestanian’s groups again studied how each click reaction component moves using diffusion NMR.5 They also developed two data analysis methods to detect and remove changes in NMR signal strength due to factors other than diffusion.

Golestanian says that the key difference between these latest findings is the choice of reference diffusion coefficient. ‘Our study does not exclude the existence of diffusion enhancement as a phenomenon in nano- and sub-nanoscale world, but shows that it does not have a measurable magnitude in this particular example,’ he says. 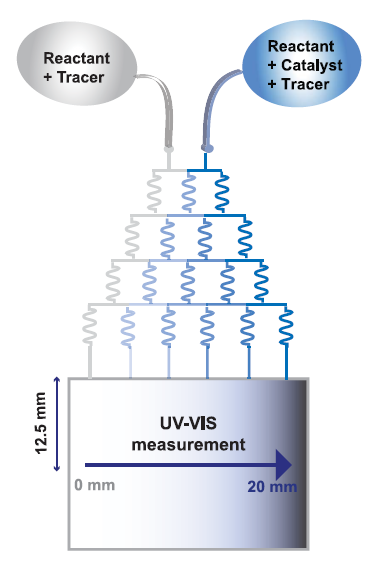 Granick argues that this new group’s data again align with his own team’s, and also with all the other critics’. The differences are due to the reference diffusion coefficients used, he says. And while the only lab currently publicly agreeing with the IBS finding is its former team-member Wang’s in Beijing, Granick points to other supporting experiments they have conducted.

In their 2020 Science paper, Wang filled a microfluidic chamber with click reagents, a dye and a concentration gradient of a catalyst. The dye gradually formed an intensity gradient opposite to the catalyst concentration gradient. That’s because solvent and dye must flow to compensate for enhanced diffusivity driving reactant molecules towards where there is more catalyst, the IBS team argue. And in a study not yet published, the South Korean team has also used optical tweezers to measure the enhanced diffusion effect in the click reaction.

Though he hasn’t yet conducted any experiments to test enhanced diffusion, the click reaction example troubles Agustí Lledó Ponsati from the University of Girona, Spain. Ponsati, who isn’t involved with any of the rival groups but does know Beves, notes that Granick’s team doesn’t propose a molecular basis for the effect. He also questions the wisdom of focusing on the click reaction, given its complexity. ‘If I were to side with someone I would back up what Beves, Fischer and the others say, though I wouldn’t deny that the effect could exist,’ Ponsati tells Chemistry World.

Rezaei-Ghaleh is convinced on theoretical grounds that enhanced diffusion can exist in some catalytic systems. He stresses that this is just the latest episode of heated, critical debate on the topic. ‘As in the case of any great scientific progress in the past, breakthroughs will require open and collegial debates until they can be universally verified and accepted,’ he says.