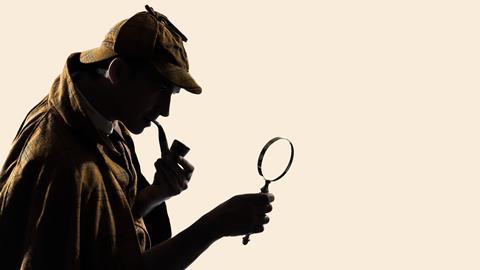 ‘I heard about it within a few hours of it coming out and immediately thought, well, that’s nonsense, that’s palladium,’ says Robin Bedford from the University of Bristol, UK.

Bedford is talking about a Nature Catalysis study published in early 2021 by Hai-Zhu Yu and Hua-Jian Xu and co-workers.1 They showed that a simple amine catalyst can replace palladium in one of chemistry’s most common carbon–carbon bond-forming reactions: cross coupling. Had it been right, it would have been paradigm shifting, says Bedford. ‘It would change what is a Nobel prize-winning field overnight.’ 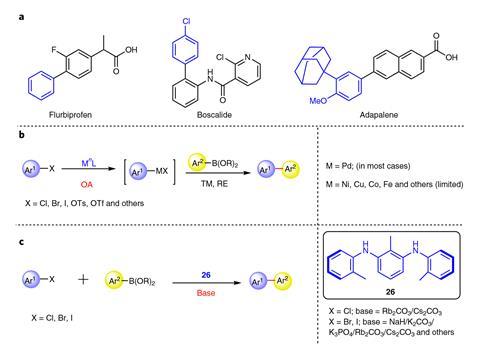 But it was too good to be true. Bedford and three other teams have now proved in three separate studies2–4 that the reaction wasn’t a revolutionary discovery but simply an example of palladium’s catalytic prowess. Through a series of unfortunate events, Yu and Xu’s team had inadvertently created an exceptionally stable and active palladium complex that evaded their purification attempts and control experiments. ‘I think it seems pretty clear to me that palladium is doing this reaction and not the amine,’ comments organic chemist Shauna Paradine from the University of Rochester, US.

Yu and Xu’s study made quite a splash when it was first published. ‘If you can find something that can upend palladium, I think that’ll be quite big,’ explains Mark Ondari, organic chemist at agricultural chemical company Corteva.

About 30% of all carbon–carbon bonds, both in laboratory flasks and industrial reactors, are created with cross-coupling chemistry. There are thousands of cross-coupling variations and modifications – all of them catalysed by palladium or another transition metal. If a simple amine catalyst could do the same job as an expensive and potentially toxic metal, ‘none of us would be using palladium or any other transition metal ever again’, says Bedford.

Yu, Xu and colleagues had taken care to remove metal contaminants. Their amine catalyst had gone through chromatographic purification on silica gel. The team had treated the amine with a sulfur-containing material that captures most metal species. They had run their reaction mixture through inductively coupled plasma mass spectrometry (ICP-MS), which can detect trace amounts of metals. ‘All of the [controls] look good, but even within these there was potential for [a] false negative,’ explains Ondari.

What made him – and many other chemists that took to social media – sceptical was buried in the study’s supporting information: the amine catalyst had been made in a two-step synthesis where each step involved a palladium catalyst. ‘It was a big fat red flag that should’ve had everybody [during the review and publication process] questioning it a lot more,’ says Ondari.

What followed was ‘peer review in its proper sense’, says Matthew Kitching from Durham University. ‘Everybody went and tried the reactions to try and find out what was going on,’ he says. The method was beautifully reproducible – though for the wrong reasons.

For Bedford, who co-led one of the response studies with Kitching and others,2 it was never in question that the reaction was palladium-catalysed. ‘One of the things that sparked my interest was why was [the palladium species] so stable?’ It turned out Yu and Xu had used made an unfortunate choice of phosphine ligand in their amine synthesis. This created a palladium–bromide complex which, during the amine’s chromatographic purification, turned into a remarkably robust palladium–chloride complex.

Xu says that despite his team working nearly four years on this reaction, this case shows that ‘some organic catalytic versions of palladium-dominated traditional coupling reactions may be difficult challenges’.

This complex is also exceptionally reactive, catalysing cross couplings at parts per million, found Kazunori Koide from the University of Pittsburgh, US, who led another study.3 He was immediately sceptical of Yu and Xu’s purification method. Working with pharmaceutical companies he knew how they struggle to remove palladium traces though multiple purification steps on specially selected chromatography resins. 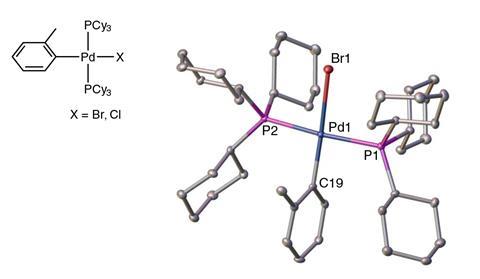 The palladium complex’s stability also explains how it could avoid ICP-MS analysis, says Zoltán Novák from Eötvös Loránd University, Hungary, who co-led the third response study.4 ‘Before you put the material into the machine, you have to correctly treat it and dissolve it.’ Since the palladium complex was impervious to the dilute acid the Yu and Xu team used, it never made it into the ICP sample. ‘We didn’t expect that the ICP-MS sample preparation method [described in a 2019 study on organocatalysed carbon–carbon bond formation] is not applicable to the amine catalyst we prepared,’ explains Xu.

Preparing the amine in a way that doesn’t involve any palladium-catalysed steps completely voided its reactivity, the Hungarian team found. But that was the one control experiment Yu, Xu and colleagues missed.

Novák and his colleagues are highly attuned to the possibility of metal contamination as something similar once happened to them. ‘When I was a PhD student in Zoltán’s lab, a colleague found conditions to omit palladium from Sonogashira coupling,’ recalls Novák’s colleague Gergely Tolnai, who now leads his own team. Only after the reaction started to produce inconsistent results and became harder to reproduce did the team realise their base, caesium carbonate, contained enough palladium to catalyse the reaction.

Luckily, Tolnai says, the blunder was caught before the team published their work. But that hasn’t always been the case. Over the last few decades, there have been multiple reports of supposedly metal-free cross couplings – none of which turned out to be real. One prominent example reported ‘the first transition-metal-free Suzuki-type coupling’ back in 2003. Like in Tolnai’s case, the palladium culprit turned out to be in the base.

While it is difficult to know whether the current case could have been avoided, Bedford would have liked to see more immediate action from the publishers. The responses were submitted (and published as preprints) only a few weeks after the initial report. Yet it took almost 11 months for them to appear on Nature’s website – enough time for other teams to start using the reaction unawares.

In July, Bien Tan’s team from Huazhong University of Science and Technology in China submitted a study to Chemical Science showing how to create conjugated microporous polymers using the ‘metal-free’ method.5 Tan explains he was not aware of the criticism because most of it had played out on Twitter, which is prohibited in China. When Chemical Science’s editorial office sent him the preprint commentaries, he immediately decided to retract his own study. Nevertheless, the work had cost his team time and money. ‘It particularly had an impact on my students, because normally they need to finish work in certain period of time,’ he says.

‘In the digital era, where stuff moves quickly, is it appropriate for things [such as the preprints that raised concerns] to be sitting around that long?’ wonders Bedford. ‘[Tan’s] paper should never have happened.’

Should it stay or should it go now?

Yu and Xu’s study has now been retracted at the authors’ behest, but this hasn’t always happened in similar cases. ‘I don’t understand why some people seem to be able to keep stuff in the literature that’s proven wrong, and others don’t,’ says Bedford.

‘Personally, I think the papers should remain,’ says Koide. ‘Yes, their interpretation was not supported by data, but all of us actually could reproduce the experiment. If misinterpretation results in retraction, I would worry for many other papers, like all the natural products where the original structure is incorrect.’ Ondari suggests a jointly authored summary paper should remain in the literature as a teaching moment.

The case highlights the lack of a universal forum for scientists to voice post-publication concerns, says Paradine. ‘The social media response was very instantaneous and very strong,’ she adds, pointing out that apart from the scientific critiques ‘there was some level of debate over how people would be calling these authors out if they were from somewhere in Europe or in the United States versus in China. The vitriol, I think, was stronger than it might have been otherwise.’

‘The reason why this attracted so much attention was the fact that it was trying to challenge a very well-established protocol,’ says Ondari. ‘But suppose this was a big group that put this paper out there, would people have jumped on it right away in the same way? Healthy scepticism is always a good thing for science, I think, as long as we apply the same kind of pressure to everybody.’