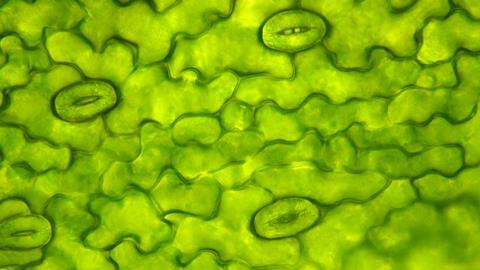 Researchers have developed a synthetic plant hormone that works across a broad spectrum of crops to control water loss. The work could lead to a chemical spray that enables farmers to control crop water use more efficiently as well as protect yields from the effects of drought, which are predicted to intensify and become more frequent as the world warms.

Abscisic acid is produced in plants and is the main hormone to aid water retention during dry spells by controlling the closure of pores called stomata that limit loss via transpiration. But when it’s artificially applied, it isn’t stable for long enough to be agriculturally useful. While more stable, synthetic mimics of abscisic acid have been developed before, they only work in certain crops and lack bioactivity in wheat and tomato.

Now, Sean Cutler’s lab at the University of California, Riverside in the US, with colleagues in Japan, has designed a new abscisic acid mimic called opabactin that is much more potent than its natural counterpart and shows a broad spectrum of activity across different crops, including wheat, tomato and barley.

‘Agriculture has a big environmental footprint and new technologies like agrochemicals that enable farmers to better manage available resources will help reduce that footprint and maximise productivity,’ says Cutler. ’Chemicals like opabactin enable real-time responsiveness to changing environmental conditions that isn’t possible in rain-fed agriculture, which is about 80% of the total.’

Opabactin (right), is an abscisic acid (left) mimic with an approximately sevenfold increase in receptor affinity relative to abscisic acid and up to 10-fold greater activity in vivo

To design opabactin, the team used a computational technique called virtual screening to identify structures from a library of 18 million small molecules that were most likely to bind to a known abscisic acid receptor in plants. In vitro tests of the best 1700 compounds brought the team to the most active amide. A scaffold merging approach was then used to graft chemical groups onto the amide’s structure that optimised its binding affinity to produce the final opabactin compound.

To test it, various crop plants in controlled growth chambers were sprayed with an opabactin solution containing a commercially-used wetting agent to help it penetrate into the leaves. Results revealed that opabactin was around 10 times more potent than naturally occurring abscisic acid in closing plant stomata to prevent transpiration. Furthermore, its effects were longer lasting and it remained stable for five days.

‘This work provides a fantastic example of the power of virtual screening to improve the potency, and to understand the specificity, of small molecules able to intervene in specific biological processes,’ comments Andrew Thompson, who specialises in plant water use at Cranfield University, UK. ‘Opabactin has potential to be used as an agrochemical to reduce water use on demand – by slowing down transpiration at specific times by spray application of the chemical, the crop could avoid a stressful crash in water relations before it is rescued by the next rainfall event.’