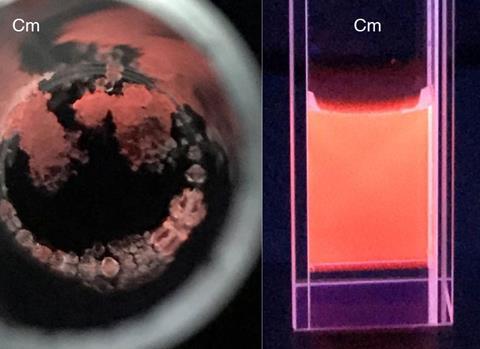 Solid Cm(W5)2 co-precipitated with CsCl–CH3COOCs (from the initial buffer; left) and an aqueous solution of Cm(W5)2 (right) both under UV light. Combining curium with polyoxometalates in this instance meant only 3μg of the actinide was used in investigations into it coordination chemistry

Chemical characterisation of rare or dangerous isotopes is now possible with as little as 1µg of material, thanks to a new technique developed by nuclear chemists.

Currently, much of the in-depth chemistry of heavy actinides is unknown, largely because they are not available in the quantities needed for a thorough investigation. This is either because of scarcity – the world’s supply might only add up to a few milligrams – the expense of obtaining the isotopes in question, their short half-lives, or a combination of all three. Although characterisation of actinides using micrograms of elements was conducted in the 1940s, further investigation has fallen out of favour due to its expense and difficulty. For example, only 10 curium complexes have been isolated and characterised since the element’s discovery in 1944.

A US team from Lawrence Livermore National Laboratory, Los Alamos National Laboratory and Oregon State University decided to tackle this problem using heavy polyoxometalate (POM) ligands, which readily form a complex with actinides. POMs are also radiation-resistant, and have their structural and spectroscopic properties governed by the metal at the centre of the structure, and are some of the heaviest and densest ligands that can still be characterised using high-resolution spectroscopy techniques.

The team opted for POM ligands based on tungsten, such as W5O186-, because of their high molecular weight and solubility in water. Using the molecules, the team were able to form complexes with curium and americium taken from microgram quantities of the elements, and study the coordination chemistry of the complexes through a variety of techniques, including Raman microscopy, NMR spectroscopy and single crystal x-ray diffraction. The three curium-POM complexes made by the team used between just 1–10µg of the target actinide per preparation.

Gauthier Deblonde, a staff scientist at Lawrence Livermore National Laboratory and corresponding author on the paper, says the team had been working on the new technique for more than three years. ‘We essentially do things more than 1000 times better than current methods, significantly decreasing the radiation exposure [risk] to the workers, and preserving rare isotope stockpiles,’ he says. ‘The method also opens the door to the structural characterisation of elements that are out of reach with current methods, like actinium and elements heavier than californium.’ In a blog post accompanying the paper , the team added that they had already applied their new approach ‘to unlock the study of novel actinide compounds and rare isotope materials, with some successes already in the pipeline’.

Lee Cronin, a chemist at the University of Glasgow, UK, with expertise in POMs, said the technique was ‘brilliant’. ‘Using POMs with high charge and loads of oxygen to coordinate means that literally vanishingly small amounts can be sequestered and characterised. It’s just a genius approach.’

Thomas Albrecht-Schoenzart, director of the Nuclear Science and Engineering Center at the Colorado School of Mines, US, says the paper is an important contribution to the field of actinide and rare isotope chemistry. ‘This is a comprehensive study that lends itself well to obtaining high-quality data on einsteinium in the future, which is something we’re sorely lacking right now,’ Albrecht-Schoenzart says. ‘They might even be able to obtain spectroscopic data on lanthanide-POM complexes doped with fermium.’

If this is the case, it would see the in-depth characterisation of all elements that can be produced in quantities greater than a single atom at a time, and push our chemical knowledge of the periodic table into the realm of species that only exist naturally inside supernovae and neutron star collisions.