Computational research by a team in India predicts that a quadruple bond could form between iron and carbon in the compound C(Fe)(CO)3.1 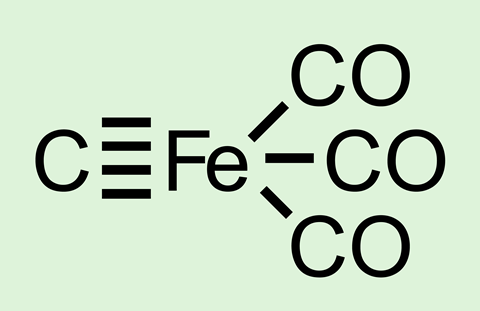 Multiple bonding between main group elements has been demonstrated up to a maximum of three bonds. However, researchers have proposed quadruple bonds in C2 and the isoelectronic equivalents CN+, BN and CB-.

As carbon atoms are isoelectronic with boron anions Guha’s team decided to investigate if a quadruple bond could form between carbon and iron in the molecule C(Fe)(CO)3. ‘Our high level calculations reveal the unprecedented formation of a true Fe–C quadruple bond with very high bond strength,’ says Guha. The findings lend weight to the theory of single electron transmutation, which predicts that after gaining an electron, an atom will act like its neighbour with the same number of electrons.

‘This study is interesting because it shows the quadruple bonding to iron can apply to main group elements other than boron,’ comments Nathan Patmore, who studies quadruple bonding in transition metal species at the University of Huddersfield in the UK. ‘It would be nice to see if experimental work could consolidate the results and if the species have interesting reactivity for catalysis and small molecule activation.’

Guha’s team hopes to expand on their study by collaborating with an experimental research group to confirm the bond.