Silicon and ruthenium could form a quadruple bond, according to quantum calculations done by scientists in India. The hypothetical quadruple bond would be the first involving a heavier p-block element.1 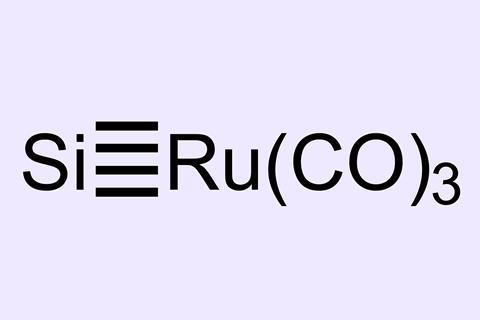 Quadruple bonds have been reported between transition metals and elements in the first p-block row of the periodic table, such as carbon and boron. And last year, Ankur Guha’s group at Cotton University calculated that a quadruple bond between carbon and iron in CFe(CO)3 should be possible, but that SiFe(CO)3 would contain a triple bond.

In this new study, Guha’s team decided to replace iron with ruthenium for a more energetically favourable configuration and analysed the bond structure of the molecule SiRu(CO)3 using computational techniques such as density functional theory. Their calculations revealed a quadruple bonding interaction between the silicon atom and ruthenium fragment.

Guha’s team suggest it is ‘quite likely’ that experimentalists will be able to make this molecule.