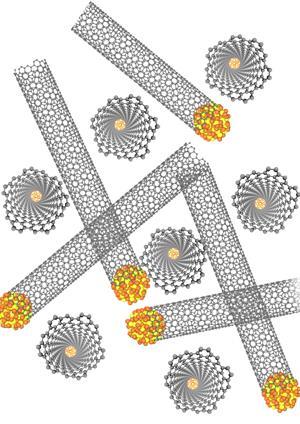 Researchers in China have taken a major step towards overcoming one of the main hurdles that is hampering the exploitation of carbon nanotubes for many high-tech applications – how to synthesise chirally pure samples.

The chirality of a single walled carbon nanotube (SWNT) is defined by the diameter of the tube (n) and the wrapping angle, or twist (m), expressed as the index (n,m). Slight changes in these parameters can lead to markedly different properties, so being able to produce a single chirality on demand would represent a major step forward. So far, however, this has proved challenging.

Now, researchers led by Yan Li of Peking University have developed a nanocrystalline tungsten-containing alloy catalyst that that produces SWNTs with more than 90% uniform chirality of the form (12,6).

Chemical vapour deposition (CVD) methods of producing SWNTs rely on a carbon-containing vapour, such as ethanol, attaching to nanocrystals of a metal-containing catalyst, whose structure largely determines the chirality of the resulting nanotube. Typically these catalysts contain mixtures of metals such as iron, nickel, copper or cobalt.

But at high temperatures – above 800°C – the structure of the catalyst breaks down, resulting in a mixture of chiral forms of the SWNTs. To overcome this problem Li’s team synthesised novel tungsten–cobalt alloy nanocrystals as a catalyst, which survive the high temperatures of CVD and produce SWNTs with more than 90% chiral purity.

The key to the team’s success was to use a molecular cluster precursor, containing cobalt and tungsten, which can be processed under moderate conditions to produce the nanocrystalline alloy. Usually, producing tungsten alloys requires temperatures in excess of 2000°C and special furnaces. ‘There are two factors which are important for reducing the alloying temperature,’ says Li. ‘The tungsten and cobalt atoms are already well mixed; and the particles are nanoscaled.’

Li says that initial experiments show that it should be possible to obtain other chirally pure forms of SWNT by preparing the alloy nanoparticles under different conditions.

Other experts in the field acknowledge the potential importance of this work. Andrew Barron at Rice University in the US says it could represent a ‘giant step forward’ in SWNT growth, akin to the discovery by Kaminsky of single-site catalysts for olefin polymerisation. ‘That changed the polymer industry and this may change the nanotube ‘industry’,’ Barron says.

Esko Kauppinen of Aalto University in Finland agrees that the new work represents ‘an important development’. He adds that having demonstrated high yields of (12,6) SWNTs, which have metallic properties, ‘it is important to also make semiconducting tubes, which are needed for transistor applications. And yield and tube growth rate are important issues to be further clarified with this novel method.’