Researchers in Italy and Germany have developed an organic memristive device that mimics the adaptive processes occurring in nervous systems such as the human brain. The work is one of the main findings of the European Commission’s Seventh Framework Programme Future and Emerging Technologies-Open project which has brought together physicists, chemists, neuroscientists and mathematicians to create breakthroughs in information and communication technologies.

Memristors (‘memory resistors’) are electronic elements with a resistance which is a function of the charge passing through them. Importantly, when the current is removed, the memristor retains this final resistance, providing a capability similar to a biological synapse. The team, led by Victor Erokhin at the University of Parma, incorporated a conducting polymer memristor into a self-assembling stochastic 3D network reminiscent of the brain’s random distribution of neurons and the connections between them.

They further demonstrated the ability to mimic ‘baby’ and ‘adult’ learning in the brain, in which strong associations and dynamic adaptations are obtained, respectively, through appropriate training protocols applied to the network. Erokhin explains that ‘in our experiments, the intention is to reinforce one pair of connections and to inhibit the other. Thus, “baby” learning is an induction of stable channels that cannot be practically inhibited during the further incoming stimuli. Instead, in our “adult” life, we have a lot of stimuli simultaneously, which results in a dynamic equilibrium of signal pathways. Therefore, in the case of adult learning, the connections can be changed by successive training’. Erokhin, who has spent a number of years in Italy after moving from Russia, draws an interesting analogy with learning to eat spaghetti. 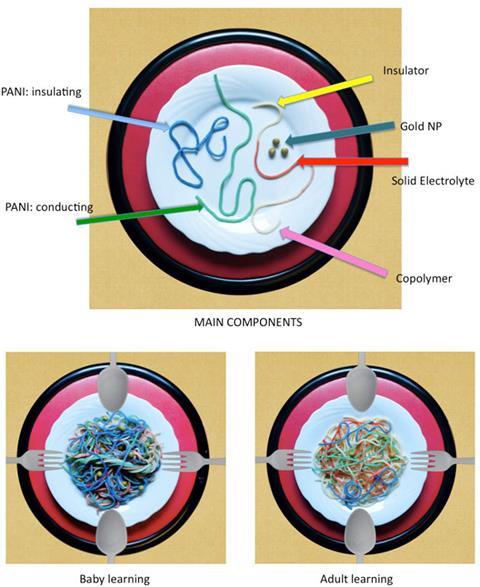 Spaghetti analogy for training the polymer network. Top: The main components of the organic memristive device. Bottom: Italian children learn that spaghetti can only be eaten with forks (strong association), whereas foreigners in Italy also can eat spaghetti with forks, but upon returning to their own country may begin to use spoons again (dynamic adaptation).

The work is ‘interesting for its bottom-up approach incorporating organic materials and at the same time exciting for the demonstration of two distinct learning modes involving adaptive processes,’ says Wei Lu at the University of Michigan, US. Rainer Waser, who heads the Electronic Materials Research Laboratory (EMRL), Germany, adds that ‘resistive switching belongs to the most promising concepts of future nanoelectronics’ and that ‘the replacement of standard microprocessors by neuromorphic systems holds the promise of a big leap in energy efficiency’. Both Lu and Waser note that while this research offers an interesting approach to realise synaptic connectivity, there are still many challenges remaining such as scalability, stability and elucidating the physical mechanism of resistive switching in this system.