Researchers in the US have developed a three-pronged molecule that simultaneously activates three different types of immune receptor. In vitro and in vivo tests found that the molecule provoked a robust immune response by mimicking how invading pathogens trigger several pathways to initiate protective immunity. The team behind the work suggest their modular concept could be adapted to create potent vaccine adjuvants for various infectious diseases. 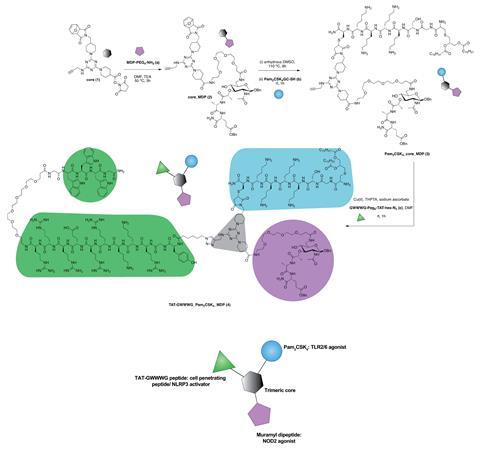 When a pathogen interacts with the immune system, it activates multiple pathways. Scientists are increasingly coming to realise that crosstalk between different pathogen-sensing pathways is central to inducing an efficient immune response. ‘In our previous work, we mainly focussed on one sub family of immune receptors,’ says Naorem Nihesh, from the University of Chicago. ‘In this work we expanded our repertoire and targeted immune receptors from three different sub-families. This makes the immune response to our vaccine more well-rounded and better.’

A triazine core sits at the centre of the structure created by Nihesh’s team. This core is conjugated to three agonists that each activate a distinct class of pathogen-sensing pathway. One agonist is a synthetic analogue of bacterial lipoprotein and activates toll-like receptors 2 and 6, which are found on cell membranes. Another agonist is muramyl dipeptide, the minimal immunomodulatory structure of bacterial cell wall peptidoglycan, which stimulates an intracellular pattern recognition receptor called NOD2. The final agonist is a cell-penetrating peptide that activates an inflammasome protein complex called NLRP3. To synthesise the modular molecule the team employed sequential conjugation chemistry.

‘The issue with a mixture of free molecules is that at a given time, cells will see a distribution of different combinations of the three molecules. Thus, the cells will be differentially stimulated,’ says Nihesh, when explaining the effectiveness of their tri-agonist molecule in modulating an immune response.

‘This work leverages an understanding of the underlying chemistry that drives immune system function to custom-design vaccine adjuvants,’ says David Spiegel, who develops synthetic approaches for understanding and treating human disease at Yale University in the US. ‘This sort of chemical approach to engineering immune responses holds enormous promise for modulating and perhaps improving the activity of vaccines.’

The group is now working on a modular molecule for a flu vaccine. ‘There are numerous immune signalling pathways that can be targeted and an even bigger number of combinations of these pathways,’ says Nihesh. ‘We believe there is a combination of immunomodulator for every bug.’