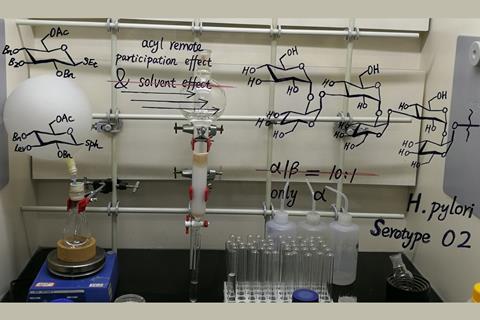 Researchers in China and Germany have completed a challenging stereoselective synthesis to make a carbohydrate found on the cell surface of Helicobacter pylori. The process could activate research into a vaccine that provides immunity against the gastritis and stomach ulcer-causing bacterium.

The bacterium H. pylori lives in the stomach of more than half the world’s population. A large number of those infected develop gastritis and ulcers, of which 1–2% develop gastric cancer making H. pylori responsible for about 60% of gastric cancers. ‘Today, effective treatment of an H. pylori infection requires multidrug regimens, typically several antibiotics used in combination with a proton pump inhibitor,’ explains Jian Yin at Jiangnan University, who led the research. ‘Eradication of H. pylori infection through antimicrobial therapy does not provide continued protection – it has a reinfection rate of 15–30% per year.’

Drug resistance is therefore reinvigorating research on carbohydrate vaccines against a wide range of pathogens, including H. pylori. Yin and his colleagues have successfully synthesised the O2 O-antigen, one of six unique carbohydrates that cover the cell surface of H. pylori. ‘It is an important first step towards a vaccine, ideally a vaccine would be covering all serotypes but this one is different from all the others, this serotype does not contain a Lewis blood group antigen,’ explains Peter Seeberger of Max-Planck Institute of Colloids and Interfaces in Germany, who collaborated with Yin on the study. ‘When you make a vaccine, you don’t want to vaccinate against structures that are self [antigens originating from within the body] because if we induce an immune response against structures that are self, then we create autoimmune diseases. This is why this particular antigen is interesting. But if that will be sufficient to protect in all cases will have to be determined.’

The H. pylori O2 O-antigen is a polysaccharide with an average length of 24 D-glucose monomers alternately α(1→2)- and α(1→3)-linked. Yin’s team used a [2+2] coupling strategy to make the novel di-, tetra- and hexasaccharides of the antigen; first they made the (1→2)-α-glucosides and then they coupled the disaccharides together to form the (1→3)-linked α-glucosides. ‘The most challenging task was the stereoselective synthesis of all α-glucosidic linkages at the sterically crowded hydroxyl groups at the C2 and C3 positions,’ says Yin. Forming the α-linkages requires the nucleophile to attacks from the more sterically crowded bottom face of the molecule and to achieve this, the researchers used a remote participation approach, employing both an acyl group in the O6 position and a Lev group in the O3 position to block the top face of the molecule. Surprisingly, when employing ether as the solvent, commonly known to increase the α:β ratio in these type of reactions, the opposite happened. ‘Usually, both acyl remote participation and solvent effects can be used to enhance α-stereoselectivity in glucose, however, these two important effects were found to counteract during α-stereoselective glucosylations for the first time,’ Yin explains.

‘Remote participation has long been considered of lesser impact than that of the neighbouring substituent at C2. However, in recent years the idea of participating groups at remote positions has been brought to the attention of many researchers,’ comments Alexei Demchenko, an expert on carbohydrate synthesis at the University of Missouri – St Louis, US. ‘There have been various reports both in favour and in opposition of the idea of remote participation. This study provides strong evidence for the viability of the remote participation hypothesis. Another interesting observation is the counteracting effect of participating ethereal solvents.’

‘This H. pylori-derived carbohydrate antigen is definitely a difficult synthetic target,’ comments Nicola Pohl, who develops glycoprotein-based therapeutics at Indiana University in the US. ‘It will be exciting to see an automated synthesis in the future to create a variety of chain lengths for immunology studies.’ 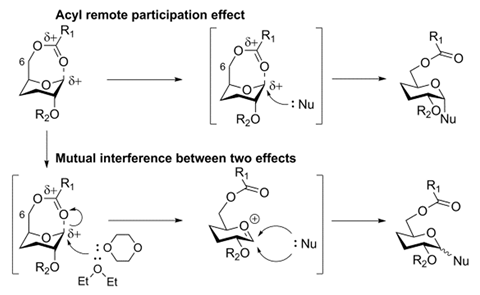 Yin says that the team aim to develop a more efficient way to produce the O2 O-antigen. ‘The collaboration between Professor Seeberger and us will now focus on the automated solid-phase synthesis of the full-length 24-mer sugar chain.’