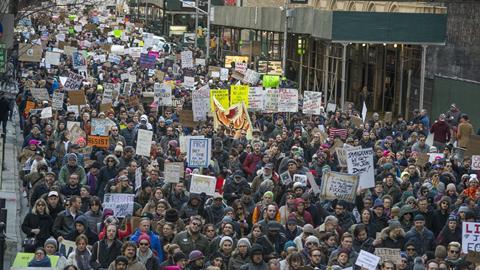 The Trump administration’s order barring the entry or return of individuals from seven Muslim-majority countries is already harming US science. This is according to university researchers and academic groups such as the Association of American Universities (AAU), who warn that the nation’s leadership in science and technology is being jeopardised.

Science groups caution that the US’s leadership in science and innovation cannot be taken for granted. ‘Other countries will gladly welcome all of this talent if we don’t make it clear that they are still welcome here,’ Toiv warns. He says US universities fully support the federal government’s efforts to prohibit entry of people who represent security threats, but points out that most, if not all, of those affected by Trump’s order already hold valid visas so have been vetted.

The president’s order was initially interpreted to prohibit entry to the US of permanent residents, or green card holders, from the nations in question. After massive protests at airports across the country, a federal judge in New York temporarily blocked part of this executive order on 27 January, ruling that those who had already landed in the US with valid visas should not be sent back to their home countries.

‘Contrary to the spirit of science’

AAAS chief executive Rush Holt, a former congressman and physicist, said that detaining students and scientists that have already been screened, processed and approved is ‘contrary to the spirit of science’. ‘In order for science and the economy to prosper, students and scientists must be free to study and work with colleagues in other countries,’ he stated.

Meanwhile, over 12,000 academics – among them dozens of Nobel laureates – have signed an open letter to Trump opposing the order. The letter warns that US research institutes host a significant number of researchers from the nations subjected to the new restrictions. From Iran alone, they estimate that more than 3000 students have received PhDs from US universities in the past three years.

These postdocs, graduate students and green card holders at US institutions will go elsewhere – they will go to Europe

Kalliat Valsaraj, the vice president for research and economic development at Louisiana State University, says his institution has a large number of undergraduates, graduate students and faculty that hail from the seven targeted countries. ‘There is a lot of angst among those students and faculty as to what will happen to them if this order remains in force for some time,’ Valsaraj tells Chemistry World. ‘This is going to significantly impact a lot of very promising students.’

Cameron Abrams, a chemical engineering professor at Drexel University in Philadelphia, says there are several PhD students from Iran in his department. ‘Our understanding is that they are not able to travel home and then get back into the US,’ he says. Abrams notes that Drexel science departments have been successfully recruiting students from Iran, in particular, for a very long time. ‘Looking forward to how we can successfully recruit new PhD students from some of these countries, it becomes somewhat more problematic if they can’t get into the country.’

Drexel’s president John Fry has issued a statement advising international students and scholars from any of the affected nations to defer any planned travel outside the US until ‘the situation can be clarified’.

Babak Seradjeh, an assistant physics professor at Indiana University who has dual Canadian–Iranian citizenship and permanent US residency, has already felt the impact of Trump’s executive order. Seradjeh was at the airport in Newark ready to fly out to Israel to meet a colleague the day after the order was signed. ‘There was a lot of chaos and uncertainty, and it appeared that people with permanent resident cards, as well as dual nationals, were being affected,’ he recalls. ‘I basically just turned back and came home.’

Seradjeh cancelled the two-week trip, and says he will not travel outside the country if the situation persists. ‘The travel part of the research project is suspended indefinitely for now,’ Seradjeh says, but he notes that the ripple effects of Trump’s directive are broader. ‘There is a substantial international graduate student population, and they will be affected,’ he says, emphasising that all projects involving any graduate student from the seven listed countries will also be compromised.

Seradjeh has thought about returning to Canada, and he is also considering pursuing an international sabbatical next year. ‘Even if I am not personally affected by this, this affects a lot of people around me, including friends and family – it is unclear if my family can travel here to visit me,’ he says. ‘It makes living here a lot more problematic.’

Mina Bissell, an Iranian–American breast cancer researcher with Lawrence Berkeley National Laboratory in California, calls the executive order ‘a real assault on education and achievement’. She says it will have a ‘huge economic cost’ in the long run. ‘These postdocs, graduate students and green card holders at US institutions will go elsewhere – they will go to Europe,’ Bissell warns. ‘Not only Muslims will leave, but so will a lot of other people who will be disgusted.’