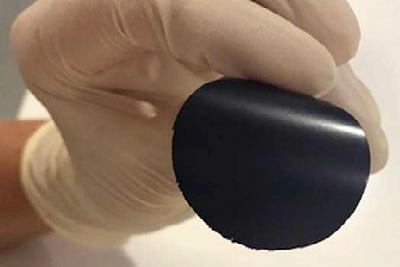 A new type of self-assembled membrane whose permeability to a number of ions varies strongly with pH has been produced from graphene oxide and polymer heterostructures. The researchers believe it could be useful for applications ranging from the production of batteries to the cleanup of radioactive waste.

Tuneable, selectively permeable membranes are widely used in nature for chemical signalling and other purposes. ‘Nerve cells use ionic pumps and ionic channels,’ explains Kostya Novoselov at the University of Manchester, UK. ‘Cells use it to select for particular ions.’ Synthetic partially permeable membranes, however, are far less selective, usually just controlling flow by the size of the pores or the relative concentrations of the solutions either side. 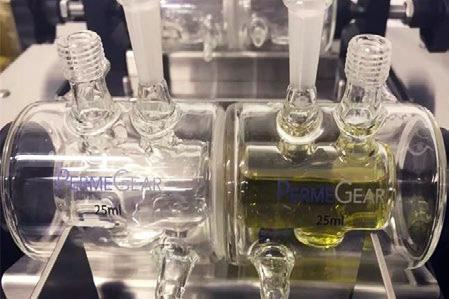 Novoselov and colleagues mixed a suspension of graphene oxide flakes into the liquid polymer polyethyleneimine. Owing to entropic effects, the flakes became covered by the polymer. When the solvent was evaporated, a highly ordered, self-assembled membrane structure of alternate graphene and polymer layers remained. When placed between a concentrated sugar solution and pure water, the membrane was relatively impermeable. However, when the researchers added hydrochloric acid to lower the pH to 2, the polymer chain became protonated and osmosis into the sugar solution sped up. ‘Our internal structure acts as an acidic reservoir,’ explains Novoselov. ‘Water rushes in trying to dilute this acid and we spit this water out on the other side.’

The researchers then looked at the structure’s permeability to ions. Here, the results were more complex: when the structure contained long polyethyleneimine chains, it was completely impermeable to any of the ions studied. Structures containing shorter chains of the same polymer, however, allowed some types of ion through. The picture was puzzling, however, and the researchers are still working to explain it fully. For example, caesium ions were unable to pass through the membrane alone, but when potassium ions were added they began to cross the membrane. ‘That’s hugely interesting, for example in drug delivery, as components of ionic transistors and in a wide range of devices,’ says first author Daria Andreeva at the University of Singapore. The technology could also potentially be developed as a clean alternative to the extraction of lithium for use in lithium-ion batteries or to remove radiocaesium – a major byproduct of uranium fission – from nuclear power plants’ wastewater.

‘I think it’s a very intriguing paper,’ says Vladimir Tsukruk of Georgia Institute of Technology in the US. ‘I would have said the properties of both of these materials had been thoroughly explored, but it shows that by combining them cleverly you can achieve something remarkable.’ He would be interested in more work on the effect of the polymer’s charge on the structure’s permeability. ‘If you could apply electrodes and change it electronically, that would be really interesting for externally controlled permeation,’ he says.