Researchers have created filtration membranes capable of withstanding strongly acidic or basic environments for 15 days. The membranes have high permeability for both polar and non-polar solvents, and could be adapted for solvent recycling, purifying pharmaceuticals and oil refineries.

‘For many years, we have lacked the appropriate materials that exhibited the proper stability,’ comments Jeffrey McCutcheon, a membranes expert at the University of Connecticut, US. ‘They’re trying to come up with a membrane that works for many different solvents, unlike conventional membranes used today.’

Thin film composites made from a selective layer and a polymeric substrate on a support are typically used as organic solvent nanofiltration membranes. However, the polymerisation reaction used to synthesise polyamide membranes tends to produce hydrophilic surfaces with low permeance for non-polar solvents. The team tackled this by using different monomers to tune the properties of the membrane. 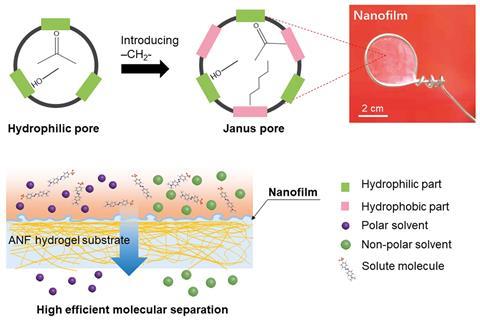 ‘Conventional polyamide is normally not resistant to strong acid or strong base; especially strong base is very difficult for the polyamide membrane,’ says Li. ‘But we introduced alkyl CH2 motifs into the network. This structure is very inert to acids and strong base, so can improve resistance in harsh environments.’ The CH2 groups formed a Janus pore structure, with both hydrophilic and hydrophobic surfaces. As a result, the membrane had affinity to both non-polar and polar solvents. Li and his colleagues tested the filtration performance in numerous solvents including acetone, toluene, methanol and n-hexane by using dyes with molecular weights from 242–1017gmol-1 as test solutes. In acetone and methanol, the membrane achieved a molecular weight cut-off of 242–327gmol-1.

Li says that, while there is no standard method to evaluate the stability of a membrane, ‘the commonly used way is testing the membrane in a long-term filtration for days or weeks,’ to test its stability by measuring the loss of permeance and separation efficiency over time. The team tested the membranes using different solvents including acetone, an aggressive organic solvent, for one week. They also kept the membranes in strongly acidic or basic solutions for 15 days to demonstrate the stability of the framework, which maintained high dye rejection rates. They attributed the stable permeance and high rejection to using a solvent-resistant aramid nanofibrous hydrogel to support the membrane.

McCutcheon says that one of the key issues facing the field is a lack of standards for testing. ‘What we need is a method that we can challenge all membranes with at the same time, so that we can all compare membranes for effective use.’