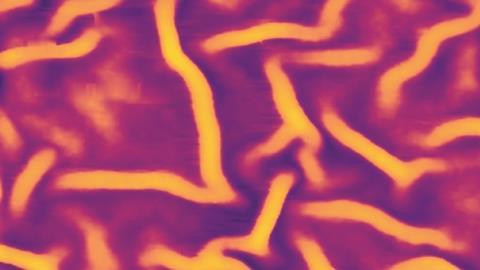 Materials structured at the nanoscale can have useful properties, but making structures this small is technically challenging. A team working in China has found a neat way around that problem: let spontaneous self-organisation do the work for you. They used a patterning process first identified in the 1950s by the mathematician Alan Turing – famed for his work breaking the Nazi Enigma cipher – to make nanostructured polymer membranes that show promise for water-purification technology.1

Creating microscopically organised polymer systems through a process of spontaneous patterning isn’t a new idea. Phase separation on the microscale in polymers comprised of immiscible blocks, akin to the formation of microemulsions by surfactants, can give rise to all sorts of periodic structures such as hexagonally arranged columns, lamellae and interpenetrating networks.2 And back in the 1980s, immiscible liquids were ‘frozen’ by rapid polymerisation at their interface to make porous membranes for nanofiltration and water purification.3 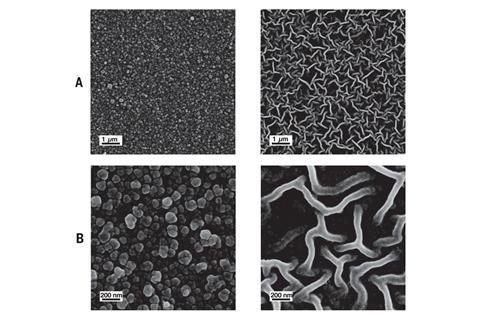 Lin Zhang of Zhejiang University in Hangzhou and co-workers have now exploited a different, non-equilibrium process to create nanopatterns. In 1952, Turing showed how a combination of reaction and diffusion in mixtures of chemical components in solution can create long-lived regions that differ in composition, and which can become highly ordered: so-called Turing structures.4 Turing wasn’t really thinking about chemical structures, but devised the chemical system as a simple analogue of symmetry-breaking and pattern-forming processes in biology, such as the emergence of embryonic shape in a fertilised egg.

Zhang and colleagues figured that if such structures could be formed in liquids that can be polymerised where the two ingredients meet – at their interface – the resulting materials will preserve the shape of the Turing pattern.

They use a variety of the well-known polymerisation process between an aqueous amine and an acyl chloride in an organic solvent to make a polyamide – the reaction used to make nylon, which forms as a film at the interface of the two liquids. The key to getting Turing structures is that the reaction needs an activator, which catalyses more of its own formation, and an inhibitor that interferes with that process. In this case, says Zhang, the amine (piperazine) serves as the activator, because it can accelerate polymerisation by absorbing the hydrochloric acid produced in the reaction. The acyl chloride (trimesoyl chloride) is the inhibitor. 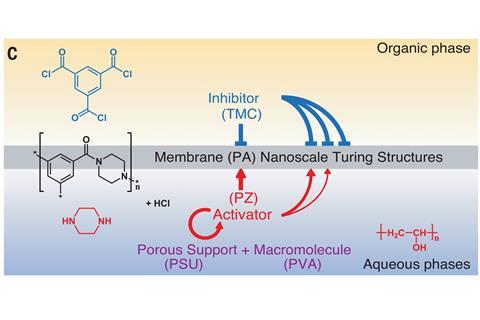 To make Turing structures, the reacting compounds must also diffuse at markedly different rates. In the normal interfacial polymerisation process this isn’t the case. But Zhang and colleagues introduce the amine through the nanoscale pores of a plastic (polysulfone) supporting film, which slows diffusion. They slowed it further by increasing the viscosity of the solution with a polymer additive. That tips the difference in diffusion rates into the regime where Turing structures start to appear.

The resulting polymer membrane, forming on the plastic support at the surface of these pattern elements, shows the characteristic features of such patterns: spots and stripes, which manifest in the polymer membrane as disorderly round dimples and wormlike wrinkles each about 100nm across. ‘By controlling the interfacial reaction conditions, we can control the transition between spots and stripes,’ says Zhang – although their size is fixed.

The researchers then tested these supported, patterned membranes for water filtration. Water can diffuse through the very thin polymer sheet, but dissolved salts are blocked. Exactly how the membranes achieves this isn’t yet clear, but Zhang and colleagues used gold nanoparticles as tracers of the flow and showed that it is highest on the pattern features – the bubbles and tubes. Possibly the more permeable sites ‘may just be areas of slightly thinner or slightly more defective polymer’, suggests Aleksandr Noy of the Lawrence Livermore National Laboratory in California, who develops water-purification membranes.

Zhang’s team found that the water fluxes are twice as big through the ‘stripe’ membranes as the ‘spot’ ones, which they attribute to the correspondingly greater surface area. And they say that whereas conventional desalination membranes have to trade off salt exclusion against water flux – the better the exclusion, the lower the flux – these Turing membranes maintain good salt exclusion even with a high flux. For sodium and magnesium sulfate solutions, for example, more than 99% of the salt is removed from water passing through at a rate of about 120l/m2 of membrane/hour.

It sounds good. But sadly, the rejection of the most important salt for seawater desalination, sodium chloride, is much lower: only about 50%. That, says Noy, means they are currently far from being competitive compared with what’s already out there. ‘Further development will be needed to bring the rejection to the more than 99% required for commercial desalination,’ he says. Another question that remains to be answered, he says, is whether the membranes can withstand the high pressures used to push water through the membranes in desalination technology.