The UK’s academic pipeline is failing to retain Black, Asian and other ethnic minority (BAME) chemists, an analysis by the Royal Society of Chemistry’s Inclusion and Diversity team has shown. The figures are particularly stark for Black students, who are far less likely than white students to be pursuing a PhD and higher academic positions.

While the numbers of UK domiciled ethnic minority students entering chemistry degrees mirror the general population, the figures change dramatically as these students advance through academia’s career stages. At undergraduate, Asian students are around 14% of the population, dropping to 7% at postgraduate. For Black students, the drop is even more severe, from about 5% at undergraduate to just over 1% at postgraduate. 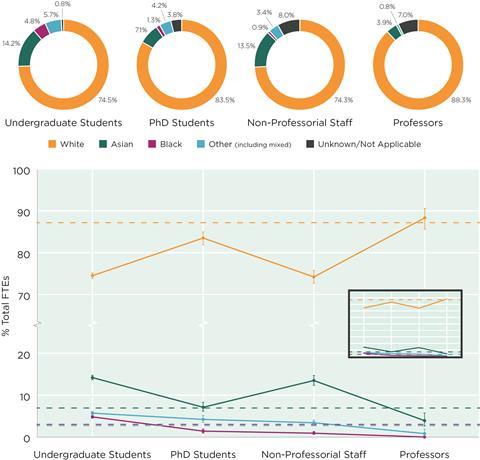 Ethnicity breakdown for chemistry students and staff at UK universities. The dashed lines show the percentage representation in the UK population

‘Beyond the PhD, the numbers absolutely diminish to the very senior levels of academia, where it is essentially barren ground for Black chemists,’ comments Robert Mokaya, who works on sustainable energy materials at the University of Nottingham. ‘When I was promoted in 2008, I was very aware that there was a lack of others like me but was unaware that I was possibly the first Black chemistry professor in the UK,’ says Mokaya. ‘My hope then was that there would be others. But I don’t know of any other appointment since then. And of course that is really very disappointing.’ 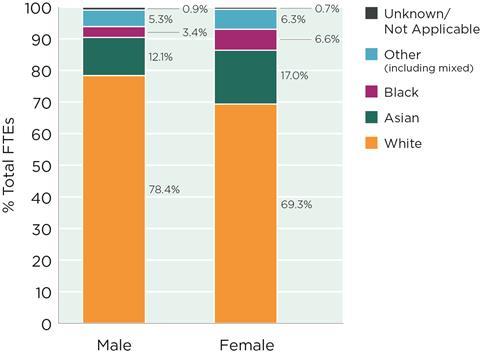 ‘It’s not like I didn’t know already that there was a very leaky pipeline for BME people,’ says Lara Lalemi, a Black PhD researcher from the University of Bristol who studies photoinitiated reactions in aerosols. ‘But [the data] is quite upsetting.’

According to the RSC’s analysis of figures collated by the Higher Education Statistics Agency (Hesa), in the 2017/18 academic year there were only 30 Black non-professorial chemistry staff at UK institutions, which is less than 1% of the total including all postdocs, lecturers and readers. The number given for Black chemistry professors is zero, because it is rounded to the nearest five. The figures show that Black physics and biology professors are equally rare, standing at zero and five, respectively.

‘I think it’s very clear that we have a lot of work to do in the UK for Black people and Black chemists,’ says Natércia Rodrigues Lopes, a researcher in ultrafast spectroscopy at the University of Warwick and the only UK-based co-organiser of #BlackInChem week. ‘With recent events, there’s a lot of talk about this in the US. But this is not a US problem, this is a global problem,’ she adds.

‘The latest Hesa data is yet more evidence that we have a problem retaining ethnic minority chemists – and, more starkly, Black chemists – through academic progression in chemistry,’ says Helen Pain, acting chief executive officer of the RSC. ‘Shaking our heads about the problem isn’t enough: we must now dig deeper to identify the specific causes, and work with our community to take action that mitigates this inequality and loss of talent – taking one more step towards truly making chemistry for everyone.’

Aaron Berko is possibly the first Black academic at the University of Kent, where he is a lecturer in forensic science and chemistry. He worked on the Mary Rose archaeological conservation and is now researching corrosion issues at the port of Dover. Berko describes his early career as atypical. ‘I was very fortunate that I had a number of my lecturers really take an interest in me, so there was quite a lot of support, which allowed me to progress,’ he recalls.

Pursuing an independent career, however, this support disappeared entirely. ‘I have found the academic landscape very challenging and you’re talking to somebody who has lived most of his adult life in Kent, a very white middle class area, so I would say I probably know how to navigate the landscape in general,’ he adds. Mentoring, Berko says, has undeniably helped him and would do a lot to address Black students’ challenges – and those of early career academics. 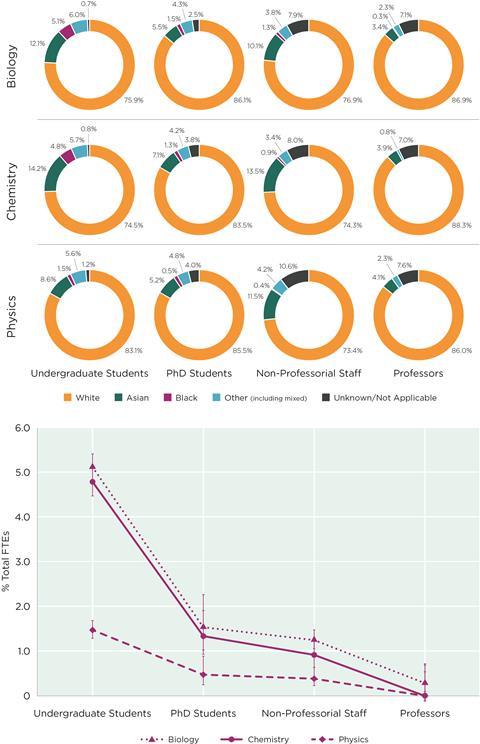 Comparison of ethnicity breakdown and Black representation for biology, chemistry and physics students and staff at UK universities

Mokaya says that the University of Nottingham has been supportive. But earlier in his career, when things weren’t going well, ‘sometimes I got the sense that people assumed that this was normal for me, because that was what was supposed to happen in my case’. That, he says, can be very discouraging.

‘I think that science doesn’t do a particularly good job at keeping BME people because, in my opinion, Stem subjects are considered pure enough that people don’t have to have conversations around race, gender, sexuality or class,’ says Lalemi, who organised a conference on BME people’s experience in science and summarised its results in a report. ‘It can be dehumanising to not be taken as your whole self within any industry.’

A strong sense of isolation and othering, along with a lack of role models and an environment that doesn’t allow people to safely raise issues of racism, are some of the key factors preventing students from progressing to a postgraduate career, Lalemi explains. ‘The most important thing to me now would be starting to decolonise the curriculum,’ she adds.

Bhavik Patel, a professor in clinical and bioanalytical chemistry at the University of Brighton, says that institutions must do more to recognise and address this problem. ‘Communicate with groups of people within these communities and understand their lived experience. That’s the first and most paramount thing that we can do,’ he says. He adds that they should also rethink their approach to tolerance, unconscious bias and allyship – and admit their challenges. 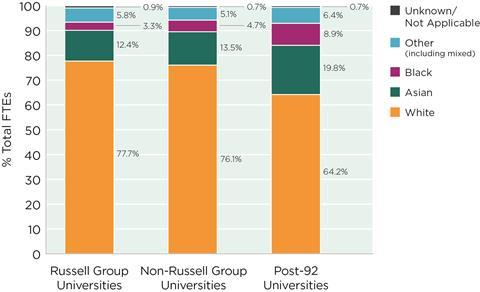 Only 15 universities have a Race Equality Charter bronze award versus 815 awards given for gender equality under the Athena Swan charter. Patel points out that uptake of the latter went up dramatically when Research Councils UK, the former umbrella body for UK research funders, included it in its list of recommended evidence for diversity. Funding bodies, says Patel, should do the same for the Race Equality Charter.

The RSC says it is now conducting research to identify the causes of chemistry’s retention problem, and will work with the UK chemistry community to devise an action plan it can take forward quickly.

1 Higher education student and staff records for the academic year 2017/18, HESA, www.hesa.ac.uk/data-and-analysis. All HESA data has been treated according to the HESA anonymisation methodology HESA methodology