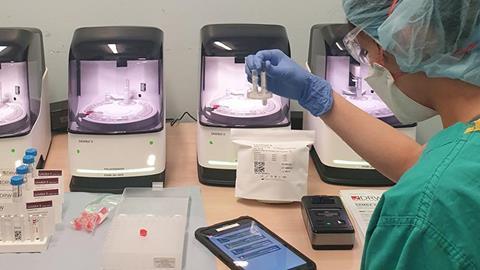 The UK is aiming to drastically scale up Covid-19 testing of its population, with health secretary Matt Hancock saying the country plans to conduct 100,000 tests a day by the end of April. An important part of these plans will see universities and research institutions drafted in to test for the virus.

But ‘we’ve got a long way to go’ before we can test anywhere near that, says Nicola Stonehouse, a molecular virologist at the University of Leeds. ‘We started this off too late and didn’t have things in place and therefore we are really playing catch up.’

Jeremy Rossman, a virologist at the University of Kent, agrees, noting that it’s too early to determine whether the UK will reach its target of 100,000 daily tests by the end of April. ‘I’m hopeful that they will.’

Rossman is critical of the UK government’s original mitigation and delay strategy that ignored what he calls ‘basic infectious disease responses’. He echoes the World Health Organization’s call for ‘urgent and aggressive action’ on containing the virus by mass-testing, contact-tracing and isolation. ‘It was a mistake to not be scaling-up on capacity for testing and contact-tracing very early on.’

By contrast, Germany has been conducting around 500,000 Covid-19 tests a week. Although more than 130,000 have tested positive in Germany, only 3500 have died. The figures for South Korea, a country that has been testing over 20,000 people daily for several weeks, are even better: over 10,500 people have contracted the virus, but only 222 have ultimately died from it.

‘In the UK, it was really hard to upscale that in a way that Germany was able to do,’ partly due to the country’s large diagnostics industry, Stonehouse says. ‘When you’ve got to do testing in an NHS-approved lab, that means doing things in a very prescribed, very ordered way.’

The third focuses on antibody tests, which are designed to detect if someone has already contracted Covid-19 and may be immune, so could therefore potentially return to work. The fourth and fifth pillars focus on surveillance and building up a large diagnostics industry that the UK lacks, in a bid to get tests out to everyone who needs them.

The Francis Crick Institute in London, the University of Cambridge and the University of Oxford have all joined efforts to either develop new tests or carry out existing tests on patient samples. The UK government is also launching three mega-labs across the UK, which it hopes can also boost testing numbers.

Meanwhile, other UK universities are supplying their staff to work in testing laboratories, as well as experimental equipment and materials such as reagents, Stonehouse says. The University of Leeds, for instance, is providing reagents and materials to the University of Oxford, where research is being conducted to find an antibody test to determine whether some has had Covid-19 and is now immune, Stonehouse adds. Rossman says, however, that there needs to be more local testing to reduce the burden on testing sites.

Stonehouse says the UK has deployed ‘quite stringent’ requirements, particularly on antibody tests, which is why some commercial products are not meeting standards. Nevertheless, she calls for the UK to try more innovative approaches. ‘We’re not being flexible enough.’

Chris Toumazou, a biomedical engineer at Imperial College London, and his team have created an automated, lab-on-a-chip system for testing that patients can potentially use at home. ‘You’re effectively taking the lab to the patient instead of the patient to the lab,’ he says.

The process, Toumazou notes, could speed up testing from two or three days to just over an hour, and preliminary data from tests on 300 people conducted last week suggests the test has 100% specificity and around 95% sensitivity. The UK government has bought 10,000 of Toumazou’s tests so far. Over the next few months, he hopes the production of the cartridges can be ramped up significantly to eventually produce hundreds of thousands or even millions of tests every week.

Ultimately, Rossman believes the UK will need to continually test a large proportion of its population – possibly multiple times – for the next 12 to 18 months until a vaccine is available. ‘I hope I’m wrong and it just actually goes away and we do in fact totally contain it,’ he says. ‘But I don’t actually see that happening.’