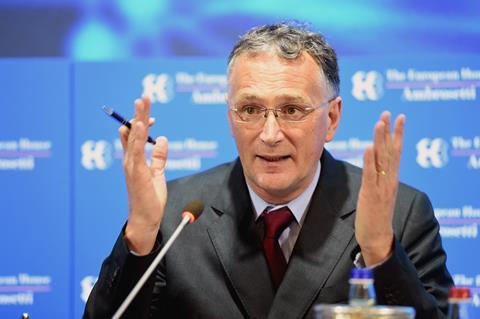 The former head of the European Research Council, Mauro Ferrari, is unhappy with the organisation’s response to the Covid-19 pandemic, prompting his resignation

Mauro Ferrari has resigned as president of the European Research Council (ERC), just 3 months into the job. His departure follows a clash with the ERC’s governing body over the organisation’s response to the Covid-19 pandemic.

Ferrari, an expert in nanomedicine, took over as president of the ERC on 1 January. However, on 7 April he issued a statement in which he said he had ‘lost faith’ in the European systems for funding research, and that he was leaving his role to return ‘to the frontlines of the fight against Covid-19, with real resources and responsibilities, away from offices in Brussels, where my political skills are clearly inadequate’.

The ERC’s scientific council quickly responded, claiming to lay out ‘the facts of the situation’. It said that Ferrari’s resignation had been unanimously demanded by all 19 active members of the scientific council on 27 March. This move was prompted by council members’ frustrations with Ferrari’s apparent failure to understand the ERC’s main purpose and tendency to prioritise other commitments over his work with the organisation.

The scientific council cited a number of flashpoints between itself and Ferrari. These included his ‘complete lack of appreciation for the raison-d’être of the ERC’, ‘lack of engagement’ and absences at key meetings, spending too much time in the US pursuing ‘multiple external enterprises’, and attempts to bypass the scientific council in his dealings with the European commission.

The row between Ferrari and ERC council members was catalysed by events that followed the worldwide outbreak of coronavirus. Ferrari claimed that as the scale of the pandemic became clear, he attempted to establish a special programme to combat the virus – a move that was rejected by the ERC, which favours ‘bottom-up’ research.

‘I thought that at a time like this, the very best scientists in the world should be provided with resources and opportunities to fight the pandemic, with new drugs, new vaccines, new diagnostic tools, new behavioural dynamic approaches based on science, to replace the oft-improvised intuitions of political leaders,’ said Ferrari. ‘The proposal was rejected unanimously by the governing body of the ERC, without even considering what shape or form it may take, and to such an extent that my presidency became fully opposed by them, in every respect.’

The council members said that Ferrari’s proposal was incompatible with its approach of supporting researchers to design and implement their own research, rather than dictating from above. It also highlighted that it has already provided €100 million (£86 million) in support to more than 50 projects that are contributing to the fight against Covid-19, and that all of its grantees have the flexibility to adjust the focus of their research.

Speaking in a public webcast hosted by Science Business, former ERC president Helga Nowotny suggested that Ferrari felt rejected when his proposals were dismissed by the ERC’s scientific council, and then sought to bypass the council and change its composition. ‘What I find tragic about it is that this is being played out with the coronavirus in the background. And here is an ambitious man who failed to understand his role,’ she said. Nowotny added that Ferrari’s statement gave the impression of someone ‘who wants to save the world’ but fails to recognise the reality of science as a collective effort.

‘What he had in mind was to repurpose the ERC,’ said Nowotny. ‘Now, let’s face it, fundamental research is not something where you can press the button and get results immediately. There are legal procedures to set up a [funding] call and even if it is a fast track call – which would have been a possibility – you have to discuss it with colleagues, you have to follow some guidelines to get it started. And none of this was properly discussed.’

Christain Ehler, a member of the European parliament and rapporteur on the €100 billion Horizon Europe research framework, said that Ferrari’s resignation brought to an end months of misunderstanding. ‘We saw before the corona crisis that this split of jobs between his entrepreneurial ambitions in the US … and the fact that he is the primus inter pares of one of the crown jewels of the European research institutions, didn’t work,’ said Ehler.

‘I think out of a personal frustration, he is accusing the European institutions in general and the commission in particular of not acting on the coronavirus drama, which is simply not true,’ added Ehler. He noted that while initial decisions were being made in Europe on the coronavirus response, Ferrari simply had not been present. ‘When he came back to Europe he realised that most of the first-hand decisions had been done, and wanted to do something impressive with the ERC – but the ERC had already been integrated in the network measures we were setting up.’

‘We have to separate his accusations from the fact that he failed as president of the ERC,’ Ehler added. ‘Yesterday all the research ministers in Europe agreed on a 10-point emergency plan … to fight the coronavirus, so it can’t be that there is no coordination.’