Polymer membranes that are extremely thin, yet strong and stable, could cut the costs of separating organic molecules and reduce energy requirements in the chemical industry, according to researchers in the UK.

Separation technology is one of the biggest drains on energy and resources in the chemical industry, with evaporative techniques including distillation requiring vast amounts of heat. Using low-energy technology such as membrane filters would reduce the energy bill for any plant, but existing filters are rarely stable enough to survive constant exposure to organic solvents.

Now, a team led by Andrew Livingston at Imperial College London, UK, have developed novel membranes that they say are strong and effective at molecular separations. The polyamide nanofilms they made are less than 10nm thick – almost as thin as biological cell membranes – but are rigid and strong enough to act as effective filters.

To fabricate them, the team used an interfacial polymerization process, creating gel-like polymer networks at the interface between layers of diamine and an acid chloride. First, they synthesised a highly crosslinked membrane of m-phenylenediamine (MPD)-trimesoyl chloride (TMC), with terminal carboxylic acid groups on one surface. Layers of this material can then be incorporated into a composite membrane that has a ‘crumpled’ texture, increasing the surface area. Just how crumpled the membrane is depends on the concentration of MPD because of the heat generated at the local level during the interfacial reaction. 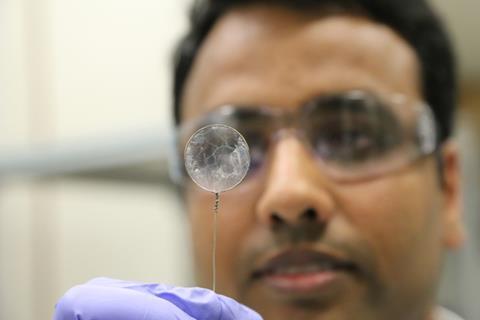 The membrane, held here on a wire lasso, is just 10nm thick

When tested, the membranes showed high retention of solutes while allowing acetonitrile solvent to permeate through at a rate of up to 112 litres per square metre per hour per bar of pressure. ‘This is more than two orders of magnitude higher than the permeance of commercially available membranes with equivalent solute retention,’ the team write in Science. They go on to say that the technology could be used for low-energy, pressurised filtration.

‘This interesting article opens up a totally new perspective on molecular design of ultrathin films for organic solvent recovery,’ says Neal Tai-Shung Chung of the National University of Singapore, who works on separation membranes. He adds that membranes may become a valuable alternative to evaporation in the pharmaceutical and petrochemical industries as a way of minimising energy consumption and reducing carbon emissions.

Writing in the same issue of Science, Viatcheslav Freger of Technion – Israel Institute of Technology, in Haifa, explains that interfacial polymerisation is ‘a remarkably simple  process [that] has simultaneously achieved both goals of generating a highly selective membrane that is also very thin yet defect free’.