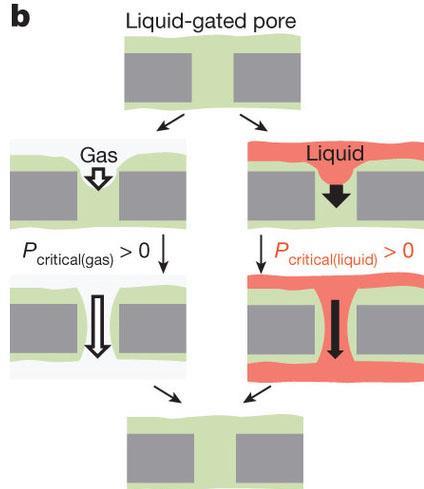 Researchers at Harvard University, US have created a membrane system capable of separating and degassing liquids without clogging. Their fluid-gating approach, which received a National Innovation Award at the TechConnect World Innovation Conference in Washington DC last month, has potential applications from water purification to biofuel processing and lab-on-chip systems.

Although systems for molecular-scale separation with tailored pore surface chemistries and pore geometries have been widely studied and have found commercial applications, they are plagued by fouling problems. In searching for a solution, the Harvard researchers were inspired by the liquid-filled micropores between air sacs in the lungs.

‘Studies suggest the liquid reconfigures in response to a pressure gradient and the alveolar pores change from being liquid filled to liquid lined and allow air to go through,’ explains study co-author Mughees Khan, a nanofabrication expert at Harvard’s Wyss Institute for Biologically Inspired Engineering.

Varying the pore size, membrane material, and coating liquid in the bio-inspired membranes tunes interfacial tensions and determines the gating pressure for a given fluid. The coated membranes can be designed to separate mixtures or to separate liquids from gases. The pores quickly and reversibly change from all open, to selectively open, to all closed depending on system pressure. This allows a new level of control over multiphase separation processes. But, more importantly, the liquid gated membrane is resistant to fouling.

‘The liquid prevents interactions with the membrane surfaces – there is limited opportunity for material to stick in the pores or on the surface of the membrane,’ states Khan. Reducing fouling reduces transmembrane pressures, making the system more efficient and extending membrane life, he adds.

Since the research was published last year, Khan and the team have been focused on de-risking the technology: proving its robustness and demonstrating applications in industrially relevant filtration and separation scenarios.

‘We have demonstrated separation of oil and water from an air-water-crude oil mixture and dramatically reduced membrane fouling by protein solutions and blood; we predict 50% energy savings for removal of suspended salt particles from brine compared to conventional membranes,‘ says Khan.

‘The original research was intriguing, and had clear industrial relevance,’ states Matthew Laudon, the co-founder and CEO of TechConnect, a global innovation prospecting company headquartered in Austin, Texas, US. But Laudon, programme chair for the TechConnect National Innovation Awards, says the technology is now ‘sufficiently mature’ to be attractive for licensing and investment.