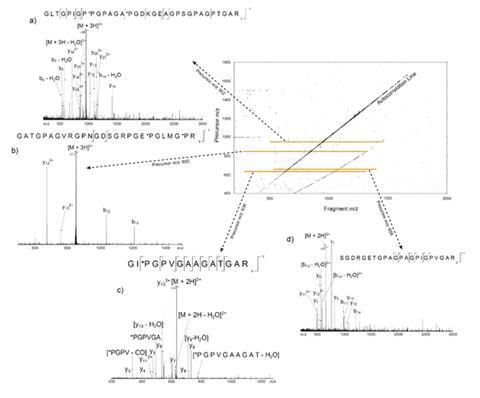 Two-dimensional Fourier transform ion cyclotron resonance mass spectrometry (2D FT-ICR MS), developed in the 1980s, links the mass-to-charge ratios of precursors and fragments in complex samples. Compared to tandem mass spectrometry, 2D FT-ICR MS does not require isolated precursors and shows better resolution. Its applications have been limited, however, due to a lack of sophisticated computers.

Collagen, a structural protein with a molar mass of over 400kDa, is a very stable molecule and lasts for thousands of years in old bones. Peter O’Connor, his team at the University of Warwick, and collaborators in France aimed to use proteomics to study archaeological collagen samples, and in the process advanced 2D FT-ICR MS to new heights by encoding a modulation frequency in the precursor ions and spreading out the signals. A great advantage of the improved technique is the time scale – a tandem mass spectrum of collagen would take at least 14 hours to obtain, whereas 2D FT-ICR MS takes only an hour using the data processing programme in this study.

‘What’s really exciting about this work is that it shows that we can effectively use mass spectrometry to sequence all peptides in a terribly complex mixture,’ says O’Connor. Hayley Simon, who piloted the project, describes the implications of the study: ‘If you have something that has mass and will fragment, you can do 2D MS of it. There’s so much potential and it’s just waiting to be explored.’

Joseph Loo, an expert in high performance mass spectrometry and proteomics at the University of California, Los Angeles, US, describes the study as the first true demonstration of the potential value of 2D FT-ICR MS for analysing complex mixtures. ‘The technique will transform how experiments will be performed in the future for complex mixtures. Who wouldn’t want more information faster?’