Unique phenomenon discovered as gel shifts to a liquid, then back to a gel and back again 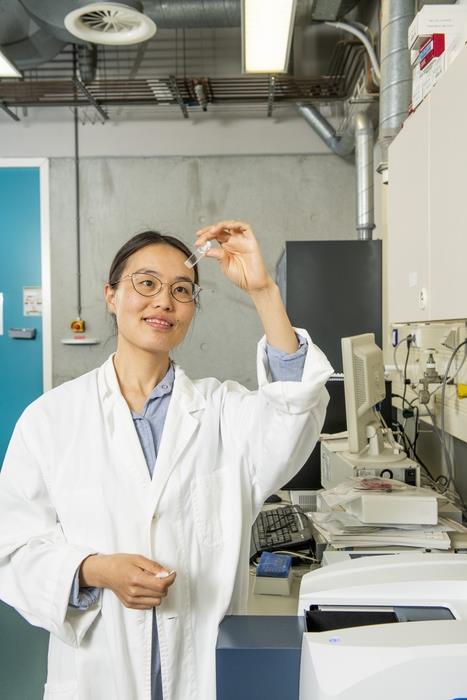 Lu Su, the paper’s first author, with the bizarre gel

In a strange twist, researchers have accidentally discovered a flowing suspension of a gel, called a sol, becomes solid gel again when it’s diluted further – going against all previous conventions.

This odd behaviour was discovered accidentally by master’s student Cyprien Muller at Eindhoven University of Technology, the Netherlands, working in Bert Meijer’s group. Muller was investigating whether surfactants could interact with supramolecular polymers. Muller and his mentor Jesús Mosquera were seeing if, by adding surfactants, they could avoid making a hydrogel when the supramolecular polymers were concentrated. And they were right. The surprise came next when they accidentally added more water. As the mixture was diluted further, the sol became a gel again.

At this point, Lu Su was also working at Eindhoven and heard about this strange behaviour. ‘I was amazed by this fascinating discovery and joined the team,’ she says. ‘During the hard lockdown in the Covid pandemic, I couldn’t stop thinking about this.’ So, together with Mosquera, she devised some experiments to try and understand what was going on.

The team took NMR spectra at different concentrations of surfactant and showed peaks for the monomers, which disappeared when the gel formed, and then reappeared again when they were diluted further. Cryo-electron microscopy confirmed these results.

The system is based on a monomer that looks like a three-pronged boomerang, and tends to stack into filaments when in water, held together with hydrogen bonds. At high concentrations, and with a surfactant present, these filaments interact with each other and come together into spheres that gel together. When diluted that interaction with the surfactant is disturbed and a free-flowing sol forms. But when diluted further, the two molecular systems interact in a different way and form a supramolecular polymer, which tangles up, again making a gel. Finally, once diluted even more, that polymer untangles and a sol is formed again.

‘Though counter-intuitive and paradigm-shifting, this work ultimately reported an outcome that seems very logical,’ says Matt Webber from the University of Notre Dame, US. ‘This work reverses the typical paradigm for the relationship between gelation and concentration.’

Practically, this work might help understand curious natural phenomena like membraneless organelles, which require concentration changes to function. Su also hopes that their work might be useful in making extracellular matrixes for cultivating stem cells. ‘By simply mixing the functional concentrated supramolecular solution with stem cell and 2x medium, the cell can dive into the in situ formed supramolecular network. Once the organoids are developed, addition of extra buffer or medium into the hydrogel enables us to quickly separate the organoids from the restored solution,’ she says.