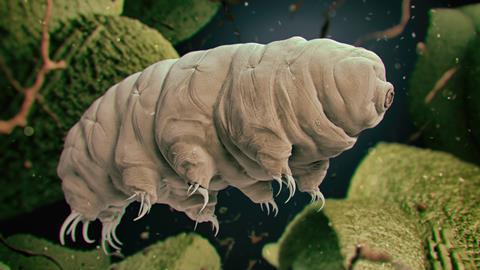 Tardigrade proteins form a gel when subjected to cold or desiccation – a mechanisms that could help the microscopic animals survive conditions that kill most other forms of life.

The half-millimetre-long tardigrades are among the most resilient animals in the world. Depending on the species, they can withstand temperatures as high as 150°C and as low as near absolute zero, as well as exposure to radiation, dehydration and even the vacuum of outer space. The animals simply go into a dormant state and revive when conditions become hospitable again. How exactly they do this is still not entirely clear.

A few years ago, researchers discovered that tardigrades’ cells contain a lot of intrinsically disordered proteins. Unlike most proteins, they don’t fold into a fixed 3D structure that gives them their function, but instead exist as a collection of conformations. ‘We don’t really understand a great deal about what functional modes they adopt, what the advantages of being unfolded rather than being folded are for the organism,’ explains Martin Blackledge from the Institute of Structural Biology in France. 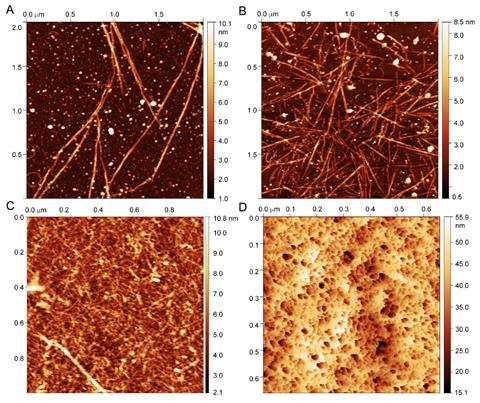 Different states of the tardigrade protein by liquid (A, B) and air mode (C, D) atomic force microscopy. Dissolving the gel on mica revealed fibrils (A) and allowing fibrillation to continue whilst the sample is drying (B) shows an increasingly dense matrix of fibrils (C). After the sample (A) was fully dehydrated, air imaging displays the entanglement of the fibrils forming a gel. Placing a gel on glass reveals porous structures, comprising cavities with tens of nanometre diameter (D)

His team has now shown how one tardigrade protein forms a fibrous gel when cooled or dried – a mechanisms that could protect 3D folded proteins from unravelling under such conditions. For the first time, the researchers assigned more than 200 nuclear magnetic resonance signals in the protein’s chaotic spectrum. They discovered a helical section at the core of the otherwise flexible structure. It is likely this section that is responsible for the gelation process as the coils of multiple proteins wrap around each other.

It turns out that regular, ordered proteins remain in their functional folded form even as the disordered protein gelates around them. The scientists speculate that the parts of the tardigrade protein that remain disordered in the gel contribute to solvating encapsulated biomolecules. Precisely how this potential protection mechanism works – and if it operates the same way in whole cells – is the subject of the team’s current research.

‘The big thing this study adds is high-resolution biophysical dissection of the individual proteins – ie what do these disordered proteins “look” like,’ comments Alex Holehouse from Washington University in St Louis, US, who has been working on the same protein for the last five years. While Blackledge’s study pushes scientists’ ability to propose and test models for how these proteins might work, ‘I don’t think this study really connects those observations to the actual mechanism of organismal survival in any strong way, but it also doesn’t claim to’, he adds.

‘I think one of the big questions that we are working on is what are [the tardigrade] proteins actually protecting,’ says Holehouse. While it’s tempting to assume that their main function is to protect other proteins from unfolding or aggregating, ‘we don’t really know if the main source of cell death is protein aggregation or something else’, he points out.

While answering these questions would be, for now, purely to satisfy biochemical curiosity, applying tardigrades’ protection mechanisms to other organisms – like plants – could make them more resistant to rapidly changing environmental conditions.