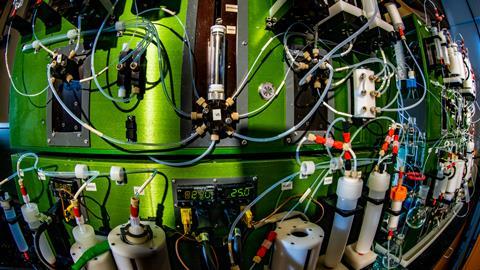 An automated platform that can make complex and functionally rich 3D molecules quickly and easily has been developed by US scientists.1 The synthesiser, which is an improved version of a system they created in 2015,2 is based on a new type of very stable building block and opens completely new possibilities in organic synthesis and drug discovery.

Martin Burke from the University of Illinois at Urbana-Champaign notes that small organic molecules rich in 3D carbon atoms that precisely display chemical information in space are extremely important in chemistry and medicine but points out that only highly trained specialists are usually able to make such complex structures. ‘We now created a robot that snaps three-dimensional building blocks together over and over again, providing push-button access to this class of chemical matter,’ he says. ’This is an important step to democratising molecular innovation in this space.’ 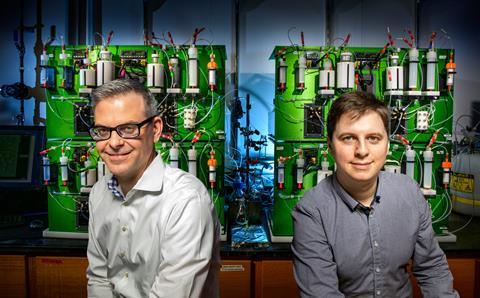 The key component of the upgraded system is a new kind of tetramethyl N-methyliminodiacetic acid (Tida) boronates that are used instead of N-methyliminodiacetic acid (Mida) boronates. ‘The original platform based on Mida boronates could primarily assemble flat, 2D molecules,’ Burke explains. ’Tida boronates now let us connect our blocks together using their saturated – or Csp3 – carbon atoms and thereby incorporate Lego-like building blocks packed with 3D information.’ He adds that this is possible because Tida boronates can be up to a thousand times more stable than Mida boronates under the conditions usually required for stereospecific Csp3–C bond-forming reactions. This increased stability was probed using x-ray crystallography and shown to be the result of an important connector piece in the Tida framework being twisted down like a screw. 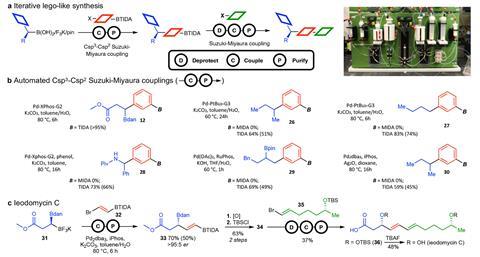 ‘Our synthesisers use a syringe to automatically transfer liquids between vessels for reactions and generalised purifications,’ explains Burke. ‘The user, who can be a specialist or a non-specialist, simply loads the required building blocks onto the machine and presses “go” on a computer to initiate a sequence of pre-programmed assembly and purification steps.’ Connecting several machines in series allows chemists to create complex small organic molecules automatically.

’The new Csp3 disconnection points enabled by Tida boronates substantially expand the types of functional molecules that can now be accessed through automated synthesis,’ Burke notes. To test the improved automated setup, he and his team created an assortment of 3D building blocks of different shapes and sizes and successfully used them to prepare the antibiotic ieodomycin C and the antifungal natural product sch725674.

‘The new boronic ester shows amazing properties,’ comments Varinder Aggarwal at the University of Bristol in the UK, who was not involved in the study. ‘It is highly hindered and so protects the boron atom from attack by nucleophiles – even highly reactive organometallics – which means that it can tolerate many reaction conditions.’ Aggarwal adds that the reactivity of the new compounds can be turned ‘on’ and ‘off’ quite easily. ‘Like the well-established Mida boronates, the Tida boronates also have a catch-and-release property, which enables molecules containing the Mida/Tida boronates to be retained on silica gel but then eluted with tetrahydrofuran, allowing an easy purification.’ All these features are essential to being able to use these compounds in an automated process, he says.