Ethoxylation gets long chain surfactants to dissolve at ambient temperatures

Scientists in Germany have developed a strategy that enhances the solubility of long-chain anionic surfactants at ambient temperatures.1 In the future, it might be possible to use the strategy to formulate cleaning products from rapeseed, olive or sunflower oils, and cut the amount of surfactant required in washing detergents.

The strategy is called Complet or concept of melting point lowering by ethoxylation. It builds on previous work by Werner Kunz, from the University of Regensburg, and colleagues, which found that anions with carboxylate headgroups and ethylene oxide units could be used as counterions to lower the melting point and water solubilisation temperature of any cationic surfactant.2

Now, a team surrounding Kunz and Matthias Kellermeier from BASF has designed ethylene oxide-containing cationic counterions for solubilising anionic surfactants. ‘We chose choline as an organic cation of biological origin with previously demonstrated ability to solubilise alkyl carboxylates and sulfates – an effect that could be significantly enhanced by addition of ethylene oxide units to the structure of choline,’ says Kunz.

Anionic surfactants comprise a hydrophobic alkyl chain with a negatively charged hydrophilic head and are used in detergents and soaps. Dissolving surfactants with alkyl chains longer than C14 in water, however, is difficult. Currently used detergents are restricted to surfactants comprising shorter alkyl chains, such as lauric acid (with a saturated C12 alkyl chain), which is primarily sourced from palm oil. The majority of the world’s palm oil supply coming from Indonesia and Malaysia, where it is linked to deforestation and the loss of habitat for tigers and orangutans, has prompted researchers to investigate alterative raw materials. 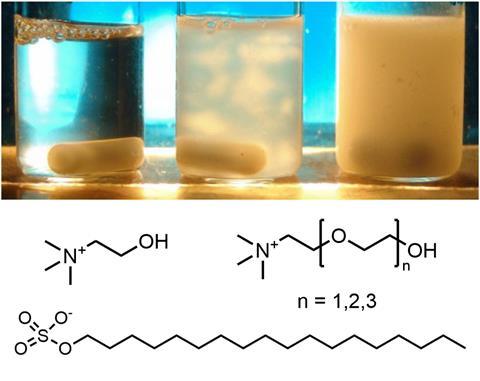 Thomas Farmer, from the University of York’s Green Chemistry Centre of Excellence, in the UK, says: ‘The logical thing is to try and look at the kinds of triglycerides and oils we might have accessible in more temperate climates.’ The most abundant sources of long chain fatty acids in the UK and Europe come from olive, rapeseed and sunflower oils – the EU harvested over 29 million tonnes of oilseeds in 2020. ‘The problem is typically that by C14, C16 and C18 chain lengths we encounter problems with solubility, so this strategy looks very promising,’ explains Farmer.

‘To us, it was surprising that the insertion of only one single ethylene oxide group into the choline molecule already led to a substantial improvement of solubilisation efficiency as compared to neat choline,’ says Kellermeier. This enhanced solubility is likely due to the increased bulkiness and asymmetry of the counterions. The oxyethylene groups also make the system more flexible, increasing the free energy of the solid state which, in turn, prevents surfactant crystals or liquid-crystalline phases from forming.

Kellermeier and Kunz say the strategy has benefits other than reducing society’s reliance on palm oil. Solubilising long-chain surfactants from a cleaning product at ambient conditions may enable energy-efficient washing at low temperatures and save resources as lower detergent dosages should deliver comparable performance due to their higher inherent surface activity.

‘In terms of an initial proof of concept, this is a great starting point so it’s just a case of extrapolating it further,’ says Farmer. Extending this proof of concept, however, is not without its barriers. ‘Prior to any such application, a profound hazard assessment will have to be made for the newly synthesised compounds and the robustness of the solubilisation concept against the presence of other salts needs to be tested,’ says Kellermeier. ‘Finally, any advantages achieved with ethoxylated choline derivatives in terms of surfactant performance or sustainability must be compared to existing technologies such as the insertion of ethylene oxide groups into anionic surfactants,’ adds Kunz.

Correction: The figure caption was updated on 21 November