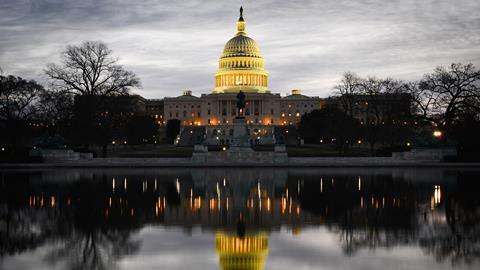 The Trump administration’s 2020 budget request is bad news for US science agencies – but on past experience not unexpected. The proposed budget requests reductions of 10% for basic research and 14% for applied research, according to analysis by the American Association for the Advancement of Science (AAAS) released after the White House issued its full proposal on 18 March. Congress is expected to intervene to mitigate the worst of the cuts, however.

The White House request would slash funding for the National Science Foundation by roughly 12% to $7.1 billion (£5.4 billion), and the National Institutes of Health’s budget by at least 12% to anywhere from $33 billion to $34.4 billion, the American Association for the Advancement of Science calculated.

The AAAS further estimated that the Department of Energy’s office of science – which is the largest federal funder of basic research in the physical sciences – would face a 16.5% decrease to $5.5 billion under Trump’s 2020 proposal. The DOE’s applied energy programmes would see a 65% reduction, including the proposed elimination of the Advanced Research Projects Agency-Energy, and the DOE’s biological and environmental research account would fall 30%.

In addition, the Environmental Protection Agency’s science and technology office is slated for a $243 million cut, which translates to a drop of 34.5%, AAAS says. Nasa would see an overall budget reduction of $21 billion, or 2.2%, and its planetary science programme would decline by about 6%.

One of the only bright spots appears to be the Department of Agriculture’s competitive grants programme, whose funding would jump 20% to $500 million. Meanwhile, Trump requested $8.6 billion in 2020 to help build the wall along the US’s border with Mexico he’s long lobbied for, despite the fact that Congress already denied his demand for $5.7 billion for that project.

Dire warnings aside, US scientists and research advocates do not appear to be too worried that Trump’s budget request will become reality. There is faith that Congress will once again save the day. In February 2018, the White House reversed the massive cuts it had proposed to science agencies in 2019 at the last minute, after Congress raised funding caps for non-defence spending. When the 2019 budget finally became law in February – more than four months late – it increased overall federal R&D spending by 6%, a much better outcome for research than the 7% cut that Trump originally requested. The 2018 budget followed a similar pattern.

‘The president’s first budget slashed science budgets by 10–20%. Back when Trump still had that new president smell – and control of both Houses in Congress,’ tweeted Ben Corb, a spokesperson for the American Society for Biochemistry and Molecular Biology. But despite Trump’s strong position the cuts never went through. ‘It is concerning to see where the president’s priorities are, but I am pretty confident that Congress has different priorities,’ he tells Chemistry World.

Congressional leaders like House Speaker Nancy Pelosi made it clear that Trump’s proposal is dead on arrival. ‘The cruel and short-sighted cuts in President Trump’s budget request are a roadmap to a sicker, weaker America,’ Pelosi said. ‘House Democrats will reject this toxic, destructive budget request which would hollow out our national strength and fail to meet the needs of the American people.’ The White House is slated to release more detailed, agency-specific 2020 budget proposals on 18 March.