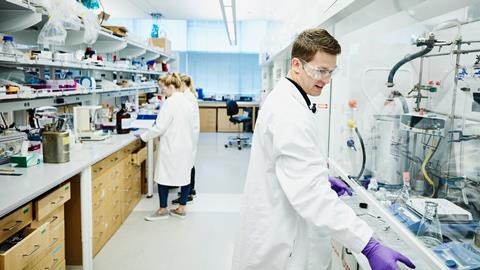 From January 2021, all doctoral researchers with Max Planck funding contracts are entitled to a higher basic salary that matches the standards of the German Science Foundation DFG. The new wage was recently approved by the Joint Science Conference – a meeting of Germany’s national and local science and finance ministers – and applies to Max Planck doctoral candidates in the country and abroad. The agreement also reduces the gender pay gap.

Christina Beck, head of communication at the Max Planck Society (MPG), explains that the minimum payment is based on the wage agreement for the public sector (TVöD), with all doctoral candidates now receiving at least 65% of TVöD 13 – around €2674 (£2348) gross per month – instead of the 50% many of them received before. ‘As a research institution funded by the federal and state governments, the MPG is obliged to follow this pay scale for doctoral researchers,’ she says. ‘Current funding contracts with a remuneration below this basic amount will be adjusted.’

But the starting salary can be even higher for particularly competitive research areas and in some cases the candidates may also receive a recruitment bonus. ‘All components can accumulate to a maximum of 100% TVöD,’ Beck says. ‘In addition, a special annual payment can be made to all doctoral candidates at a Max Planck Institute.’

The wage increase applies to institutes in Germany, the Netherlands and Italy. Lea Heckmann, the spokesperson for Max Planck’s doctoral network PhDnet, notes that around 3400 doctoral researchers will benefit from it. Recent PhDnet surveys suggested that one in five of them relies on additional monetary support, she says. ‘Financial insecurity is increased by short-duration contracts or stipends with often far lower salaries.’

Heckmann believes that the higher basic salary will also help to reduce the current gender pay gap, which she says is around €93 per month. ‘We do expect a significant decrease with the recently applied change to 65% contracts since one of the major driving factors is probably the pay gap between disciplines,’ she says. ‘50% contracts were far more abundant in institutes focusing on human sciences, which have a majority of female doctoral researchers, than in those focusing on natural sciences, which show a majority of male doctoral researchers. But we have to wait for our next survey to confirm this.’

The new compensation system agrees with the funding rates introduced by the DFG in 2009 to make doctoral research in Germany more attractive and internationally competitive, a DFG spokesperson told Chemistry World. ‘Good employment conditions contribute to the attractiveness of scientific careers, and a fair and transparent salary system enhances the degree of satisfaction that researchers feel with their job situation. Moreover, the fact that the DFG, as Germany’s biggest research funding organisation, and its partners, the research performing organisations, have harmonised their salary rates, makes it easier for international scientists to orientate themselves in the German academic landscape.’