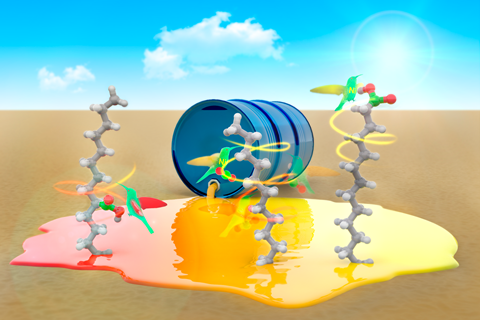 A Spanish team has created a process that can take carbon dioxide and petroleum products and turn them into specific, high value fatty acids

A catalytic process has been developed that can take the greenhouse gas carbon dioxide and combine it with hydrocarbons to make fatty acids with high selectivity. The approach not only offers a platform for using carbon dioxide as a raw material in the synthesis of valuable chemicals, but also allows petroleum-derived feedstocks to be used without previous refining.

Fatty acids – used to produce plastics, food and pharmaceuticals – are long-chain organic compounds containing a carboxyl group. They are easily obtained by breaking down plant- and animal-derived lipids, but the products are complex mixtures of different chain lengths that need to be purified before they’re of any practical industrial use. Current methods to produce specific fatty acids suffer from a number of drawbacks including having to use just one alkene isomer, precious metal catalysts and hazardous reactants – all of which drive up the cost of production.

Inspired by a reaction used in polymerisation, Rubén Martín and his colleagues at the Institute of Chemical Research of Catalonia designed a cheap nickel catalyst that can ‘walk’ along a hydrocarbon chain, allowing them to incorporate carbon dioxide at specific reaction sites. The process begins by exposing unsaturated hydrocarbons to hydrobromic acid to produce alkyl bromides. Then the new catalyst attaches itself to the hydrocarbon chain to form an intermediate with a carbon–nickel bond. The large complex interacts with neighbouring groups, which destabilises the intermediate and makes the nickel atom ‘walk’ along the chain until it finds a position that is free from these interactions. Carbon dioxide then reacts with the carbon–nickel bond to generate a specific fatty acid. The researchers found that they could fix the position at which the carbon dioxide was inserted in both alkenes and alkanes by varying the temperature.

‘Unlike other fatty acid syntheses, the site selectivity can be switched and predictably controlled by a judicious choice of the reaction conditions,’ Martín says. ’As we increase the temperature, the rate of the chain walk increases. This allows us to activate the site that results in the most stable product.’

James Tour, a synthetic organic chemist at Rice University, US, agrees that the new procedure offers several advantages. ‘This is a powerful technique to make specific fatty acids that you need for higher priced applications, like in pharmaceutical formulations,’ he says. ‘One of the nice things about it is that it can give you odd-numbered fatty acids, which are hard to make and of high cost.’ However, he adds this process is ‘not designed to compete with the formation of fatty acids for consumption. This is for speciality ones.’