A ruthenium compound that uses pH changes to switch between catalysing two complimentary processes – a dehydrogenative coupling and a hydrogenation reaction – has been developed by chemists in India.1 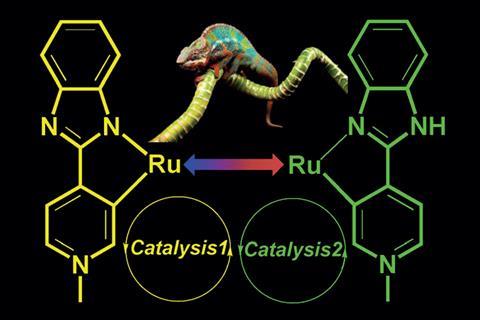 Catalysts that respond to external stimuli have been made before. But these often only switch between ‘on’ and ‘off’ positions – very few are capable of accelerating more than one reaction. To date, only a couple of examples of bi-functional switchable catalysts have been discovered,2,3 and this is the first to be controlled by pH.

Researchers led by Joyanta Choudhury at the Indian Institute of Science Education and Research synthesised a ruthenium complex that can perform very different functions due to different coordination modes in acidic and basic conditions.

The team tested the catalyst’s two ‘states’ independently to prove their efficiency. Both proved to be robust and selective for hydrogenation and dehydrogenative coupling in basic and acidic conditions, respectively. The researchers then developed a one-pot, tandem catalytic process where each step was triggered by a pH stimulus. ‘[This] was the most-challenging part of the work,’ explains Choudhury. ‘Specially finding common yet compatible reaction conditions for both transformations without compromising the activity.’ After 24 hours, the tandem reaction reached an overall yield of 70%. It was also shown to work on a large scale. 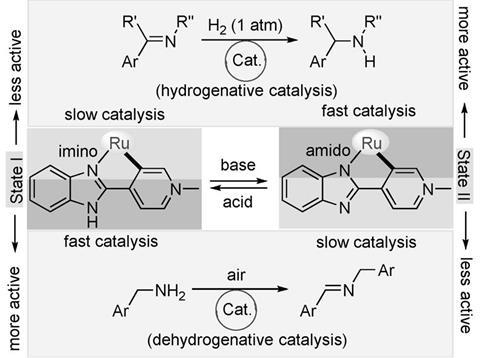 Vanesa Marcos, an expert in switchable catalysts at the University of Manchester, UK, believes this development ‘brings the goal of achieving a “bio-like” level of control over chemical transformations tantalisingly within reach’. ‘The use of pH as stimuli could enable the application of these smart systems in biological processes,’ she tells Chemistry World, adding that ‘the field of switchable catalysts should ultimately be able to solve problems that are difficult or impossible to achieve using conventional methodologies’.

Jefferey Byers, an organometallic catalysis expert at Boston College, US, agrees. ‘I believe the usefulness of this idea for the assembly of sophisticated molecules is only now beginning to emerge,’ he says. ‘It has many potential applications in synthesis and molecular engineering.’

Choudhury shares their enthusiasm. ‘This field is truly exciting – you are actually playing with the ‘genes’ of a catalyst,’ he says. ‘Doing the right modifications and manipulations […] we can achieve multifunctional catalysts that perform unimaginable transformations with precise control.’ He adds that the group is currently working on switchable catalysts that use abundant first row metals, as well as investigating new applications for their pH-responsive ruthenium switch.