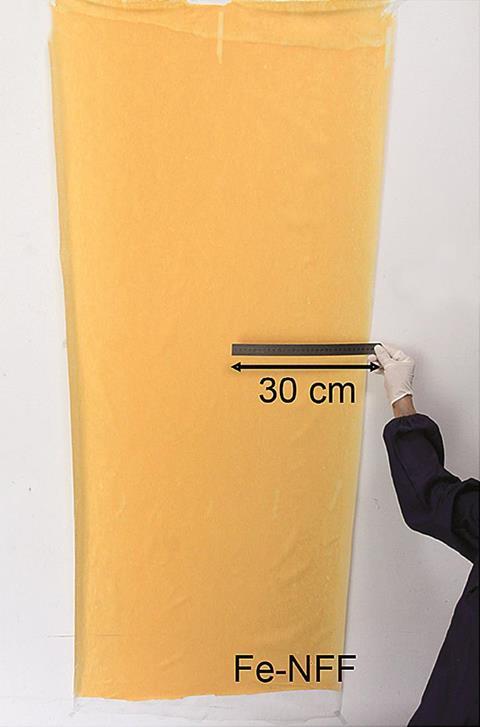 Scientists from China and Singapore have used electrospinning to make a free-standing catalyst for generating hydrogen and oxygen that could be made on an industrial scale.

Oxygen reduction and hydrogen evolution are electrocatalysed in water splitting devices. The best catalysts are usually platinum-based, but they are costly and not very durable, which limits their use on a large scale.

One method to overcome this limitation is electrospinning, which makes fibres that can be used to create scalable electrocatalysts. The problem with these catalysts so far is that they have a limited number of accessible active sites and inefficient mass transport pathways.

Now, a group led by Shengjie Peng from the National University of Singapore and Xiaohong Qin from Donghua University solved this issue. The team made porous channel-rich carbon nanofibres from a blend of pyrolysed electrospun polyacrylonitrile and cellulose acetate nanofibres. During synthesis, the cellulose acetate decomposed, creating the much-needed active sites and mass transport pathways to enhance catalytic performance. Iron-based precursors were added to the spinning solution as cheap and efficient electrocatalysts.

Using the new material, Peng and co-workers were able to create a 180 x 80cm electrocatalyst, which was flexible and stable with good performance. It is now hoped their innovation will catalyse the pathway toward next generation flexible electrodes.