A solution to puzzling claims that water arranges itself in rings and chains, rather than the anticipated tetrahedral arrangement, may have been found 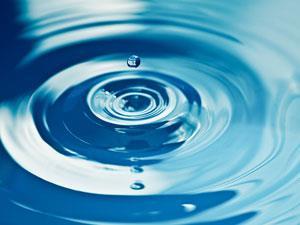 Is the structure of water asymmetric? We may be asking the wrong question if we don’t consider over what timescale

A controversy about the structure of liquid water that has raged for almost a decade may be laid to rest by a new computational study. Thomas Kühne and Rustam Khaliullin of the University of Mainz in Germany say that both sides of the argument may be right, depending on how you investigate the question.1

The tetrahedral coordination of water molecules – each one hydrogen-bonded to four neighbours – has an almost iconic status in studies of water structure. That’s certainly how it appears in ice, and both experiments and simulations seemed to suggest that the liquid state has this same motif in its dynamic, less ordered hydrogen-bonded network. But that picture was challenged in 2004 by measurements of water’s x-ray absorption spectrum (XAS) made by Anders Nilsson of Stanford University and co-workers.2 They argued that their results showed water molecules bound primarily into linear chains and rings.

This claim was strongly disputed – some argued that Nilsson and colleagues had made unwarranted assumptions in deriving a structure from their raw data.3 The Stanford team has since modified their picture to propose that water contains a mixture of near-tetrahedral bonds and highly distorted hydrogen bonds with little directionality.4

Kühne and Khaliullin didn’t set out to resolve the dispute. ‘Initially, we were interested to see how the electronic structure of water molecules changes as they approach a surface,’ says Kühne. To do this they used a new computational technique dubbed ALMO EDA, which breaks the molecular interaction energies into components that can be ascribed physical meanings in terms of the bonding involved.5

To their surprise, they found that even in the bulk phase many molecules didn’t have the expected tetrahedral coordination with four equivalent hydrogen bonds. Instead, two of these bonds were much stronger than the other two: the bonding was asymmetric. This wasn’t because of two distinct types of hydrogen bond, as some researchers have previously proposed, rather the different bond strengths were due to greater or lesser distortions of a single type of bond.

As a result, the environment of a typical water molecule is strongly asymmetric at any moment in time. But because the asymmetry is rapidly fluctuating, it is averaged away on timescales of a few hundred femtoseconds, restoring the appearance of tetrahedrality. Because XAS probes timescales of less than a femtosecond, say Kühne and Khaliullin, it ‘sees’ the instantaneous symmetry, which Nilsson’s team interpreted as evidence of two-coordinate structures.

So whether or not water’s structure should be called tetrahedral therefore ‘depends strongly on the context’, says Kühne. ‘The instantaneous environment of a water molecule does not look like a tetrahedron at all.’

‘This is a very important step forward,’ says Nilsson. ‘It is very close to our original suggestion that many molecules will be in instantaneous configurations with one strong and one weak hydrogen bond.’

‘I like this paper a lot and think it makes a good contribution to the subject,’ says Alan Soper of the Rutherford Appleton Laboratory, UK. ‘It suggests an important effect is the fluctuations in electron density between bonded molecules, which happen on a much faster timescale than would be apparent in the nuclear motions. It seems a very rational view, and one that has been expressed in different forms by other authors.’

However, Soper was not persuaded by the interpretation of Nilsson and colleagues, and so sees no need of any ‘resolution’. ‘My own view is that there never was a viable “asymmetric” model of water structure: all existing models for the water interaction potential lead to a view of the structure that is symmetric with nearly two donor and two acceptor hydrogen bonds on average, but with significant fluctuations around the mean.’

More generally, says Kühne, the new results are a reminder that conventional measures of chemical bonding are just averages. ‘If we consider a chemical bond on the atomic scale, we will always see a dynamical object with fluctuating length and strength.’