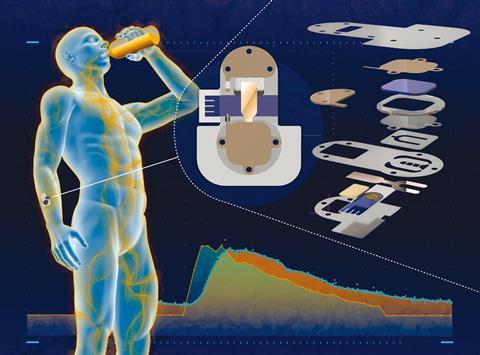 Sweat alcohol levels correlate with blood alcohol levels, new research confirms. The findings come from a study by US researchers who have made a wearable device that stimulates sweat production and measures its ethanol concentration every 25 seconds. The system could be developed to track important analytes like hormones, or pharmaceuticals, to tell users how drugs are metabolising in their body in real time.

Jason Heikenfeld from the University of Cincinnati, US, and his colleagues gave human subjects an alcoholic drink and measured ethanol levels in sweat from their forearms using a new non-invasive microfluidic sensing patch they have developed. The results mimicked blood alcohol content measured using a commercial breathalyser, with an expected time lag. ‘[This is] the world’s first demonstration where you have blood and sweat data that are lining up very nicely in a simple wearable patch,’ comments Heikenfeld. 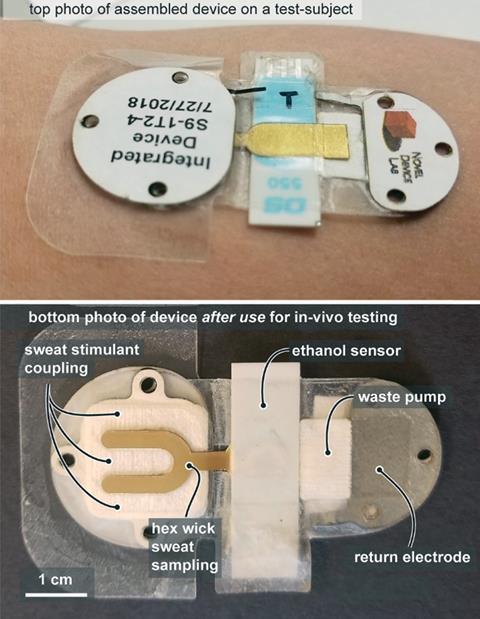 Many sweat-sensing devices rely on sweat produced from exercise, which is unsuitable for continuously monitoring substances in sweat. Heikenfeld’s device is simply applied to subjects’ skin and stimulates sweat on demand using a technique called iontophoresis. A tiny current drives a chemical, in this case carbachol, into the skin to cause local sweating. Steady state sweat generation results and can last for hours or days, allowing continuous measurement.

A commercial ethanol sensor analyses the sweat. It measures hydrogen peroxide, which is generated when alcohol oxidase on the sensor’s electrode metabolises ethanol.

Getting sweat to the sensor, however, was particularly difficult given the nanolitre sample volumes. The researchers overcame this challenge using a “hex-wick” material that mops up sweat and rapidly transports it to the sensor, reducing the time sweat is on the skin surface and prone to contamination.

David Cunningham, of Southeast Missouri State University, US, who has more than 25 years’ experience in drug, diagnostic and medical device development, including wearable biosensors, is impressed by the ‘excellent integration of individual components, with the stimulation of sweat, microfluidics to transfer the fluid from the skin to the device, and enzyme electrode.’

The aim, and the challenges, for such devices is to continuously track molecular information in blood in a non-invasive way. This device achieves correlation as ethanol is small and fat-soluble so can easily pass through cell membranes in the body, resulting in a 1:1 ratio of ethanol in sweat and blood. ‘Ethanol is really just a great proof point for the bigger vision of measuring steroid hormones like cortisol, testosterone and oestrogen, and for continuously measuring circulating medications that are small and lipophilic,’ comments Heikenfeld.

‘I wouldn’t underestimate the challenges in getting from this type of proof-of-principle device to a fully functional wearable reliable device. It’s a major challenge to actually bring that to the next level of development,’ comments Dermot Diamond, director of the National Centre for Sensor Research at Dublin City University. Despite the challenges he says it’s an important area of research: ‘You’re getting this massive aggregation of interest from some of the biggest industry sectors globally – pharmaceuticals, medical devices and the big ICT companies are coming together and it doesn’t get much bigger than that.’