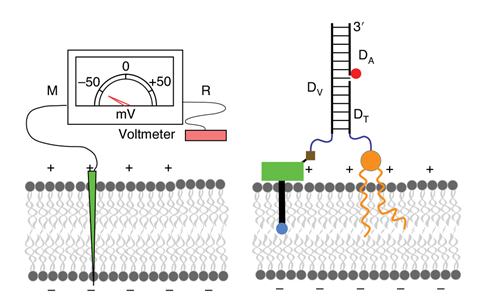 A DNA-based voltmeter has been created that can measure membrane potential in organelles. The device is the first to be able to measure such electrochemical ranges, setting the scene for real-time reporting of organelle damage.

Intracellular organelles have a membrane potential, yet the role this feature plays in their function is difficult to investigate as there were no tools to monitor it. The voltmeter Voltair was built using three components: a voltage-sensing dye, a reference probe and a targeting moiety that directs the device to the organelle of interest. The team has a particular interest in the endocytic pathway so created a DNA-based targeting moiety that delivers the voltmeter via scavenger receptors to organelles involved in this process.

To explore membrane potential changes in endosomal maturation, researchers targeted the voltmeter to endosomes, late endosomes and lysosomes. They also studied the recycling of endosomes and the trans-Golgi network, the region of the Golgi apparatus furthest from the nucleus.

The contribution of the H+-ATPase proton pump to the membrane potentials of various organelles was measured usuing Voltair. The found that each organelle membrane had different electrochemical characteristics.

The researchers say that Voltair could be used to report organelle damage. When a membrane breaks, voltage is expected to be null, whereas when a membrane is repaired, voltage varies. Voltair could detect and report such fluctuation in real-time. It could also guide research on biocompatible electronics. By measuring the absolute membrane potential, researchers could model cellular responses to electrical stimuli in organelles.