Analysis at your fingertips

Wearable sensors could transform our response to chemical threats

We live in a dangerous world. Regrettably, these words accurately depict the current state of global affairs, as evidenced by a series of shocking acts of chemical terrorism that have taken place this year. When such terror events occur, timing of chemical information is critical. Wearable sensors have the ability to deliver such rapid, on-site analysis and provide answers for first responders to direct containment, treat victims and assist with intelligence gathering for criminal investigations. 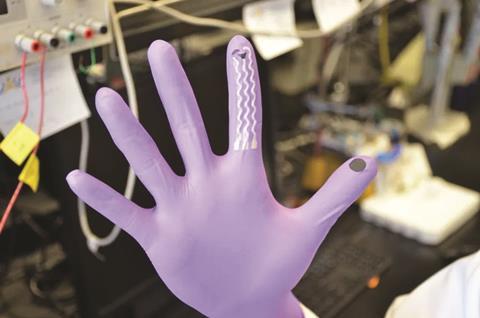 Bringing real-time chemical analysis directly into the field has utility beyond emergency personnel. It could be used to track hazardous exposure on the battlefield, in laboratories and factories, or among the general population. So how ubiquitous will wearable chemical sensors become in our society, and how far can they take us?

The allure of being able to have immediate chemical feedback for a situation without sending a sample to the laboratory has led to intense research into developing wearable sensors for personalised monitoring. Currently these devices, which include temporary tattoos, patches, bands and textiles, are mainly centred on healthcare and fitness (see Chemistry World, May 2017, p16).

Our focus has been on the development of wearables for the analysis of hazardous chemicals, including a fully integrated wearable glove biosensor for the detection of nerve agents.1 Termed a ‘lab-on-a-glove’, the biosensor allows the user to swipe a suspect surface using their thumb and electrochemically analyse the sample by touching it with their index finger. Samples are analysed for the presence of nerve agent using portable electronics on the back of the hand, with results wirelessly transmitted to the user’s smartphone. This builds on the ‘forensic finger’ concept developed at the University of California, San Diego, US, that allows crime scene investigators to carry out on-the-spot chemical detection for gunshot or explosive residue, or even to analyse suspected drugs.2

The technology can also be used for personal protection. Timothy Swager’s lab at the Massachusetts Institute of Technology (MIT), US, is developing wearable sensors for passive on-body monitoring of hazardous chemicals. These badges utilise conductive carbon nanotubes sheathed in an insulating polymer, which break down on contact with a nerve agent in a controlled and measurable way. The badge incorporates near-field communication (NFC) for smartphone analysis and display of the exposure level, represented by a traffic light system.3 Such personalised hazard monitoring has also been extended to marine environments; electrochemical sensors have been incorporated into wetsuits for environmental monitoring or for detecting explosive devices underwater.

Wearing the future on our sleeves

Where will this take us in the future? The current state of chemical wearables is anchored in developing suitable materials for on-body compatibility and electronics integration for analyte detection and data analysis. In the short-term, multiplexing of diverse sensors will allow access to a range of chemical analyses within a single wearable platform; this will be important to extend the utility of wearables in the field. Ultimately, multiparametric sensing systems are needed, which will simultaneously monitor both the user’s physiology and the chemical environment around them in a seamless and non-invasive manner. Once a chemical threat is detected, an alert could be broadcast to anyone nearby via smart glasses or contact lenses – allowing more intelligence-led tactical missions and battlefield management, including effective telemedicine.

And chemical detection will not just be limited to our clothes. The innovations used in creating chemical wearables will allow the development of active sensing skins on buildings, cars and infrastructure. This approach could simultaneously identify chemical release agents and alert first responders – increasing preparedness in emergency situations.

The possibilities around what the future holds for wearable sensors are boundless, freeing ourselves from the laboratory bench and taking chemical analysis directly to people. Ideally, this would be through non-invasive ‘unawearables’ such as transparent tattoos or smart textiles powered using biofuel cells or other energy-harvesting capabilities. Already, the MIT Media Lab is working on its DermalAbyss project – where the user’s skin is both the sensing surface and interactive display. This is achieved by replacing traditional tattoo inks with biosensors that change colour in response to variations in metabolite concentrations. Our own skin can now deliver real-time chemical analysis of the world around us. Which begs the question: are our bodies the ultimate wearable technology?