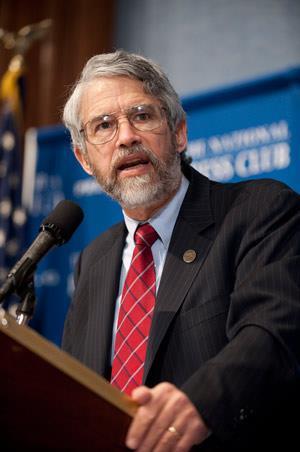 White House science adviser John Holdren and the leaders of three key US science agencies have warned that the nation must up its commitment to science and innovation at the American Association for the Advancement of Science (AAAS) annual meeting in Washington, DC.

Holdren expressed disappointment that the Obama administration has fallen short of the president’s goal to increase spending on R&D to more than 3% of GDP.

‘We haven’t quite got there, we are still just under 3%,’ Holdren said. Meanwhile, he said China is closing the gap and now spends just over 2% of its GDP on R&D. ‘If it were up to me, I would say 4%,’ Holdren told meeting attendees, but he acknowledged that might be unrealistic considering the US is $40 billion (£28 billion) short of reaching the 3% of GDP target.

It has always been a challenge to answer how much R&D investment is sufficient, but empirical evidence shows that the US is making an inadequate investment in science, technology and innovation, he said. The National Institutes of Health (NIH) is only able to fund about 16 or 17% of the grant proposals it receives, he added, when it is estimated that about 50% of the applications submitted have merit.

‘At NIH, with $33 billion, they are funding a third of the worthy projects,’ Holdren said. The situation at the NSF is very similar, with a ‘very low’ research application success rate and a ‘very high fraction’ of worthy projects. ‘It is clear that we are not spending enough.’

As another example, Franklin Orr, the Department of Energy’s (DOE) undersecretary for science and energy, told delegates that the grant application success rate at the Advanced Research Projects Agency, which is his agency’s cutting-edge energy technology funding arm, is only about 2%. The DOE is ‘pretty sure’ that if a greater portion of the US’s GDP is devoted to R&D ‘we can put a lot of that to work’, Orr said.

While Holdren acknowledged that nobody can argue that 3% is exactly the right target, he said it is ‘a plausible number’ because the figure has been that high before, and rather than wrecking the US economy it actually helped it grow.

Cordova pointed out that the grant application success rate for early investigators, who are within a dozen years of their PhD, is ‘much, much lower’ at her agency and elsewhere. ‘We are very worried,’ Cordova said. ‘The other consequence of this is that we are losing people to science because they are getting discouraged by not getting their grant accepted.’

Holdren, who directs the White House Office of Science and Technology Policy, emphasised that the US can still claim the great proportion of top 10 universities in the world, and more than half of the top 50 international universities.

Nevertheless, he warned that significant challenges remain, including how to sustaining US support for science and technology under current budget caps. For example, Holdren said the DOE has some expensive propositions that will be hard to sustain but are very important, including carbon capture and sequestration.

In addition, he noted that the NSF is under fire from politicians ‘who seem not to like earth sciences or social sciences very much and are trying to fiddle with the gold standard peer review process, even as regards to basic research’. He also expressed concern that climate science and sustainability science are ‘continuously subject to sniping from some who think that doing science in this domain is equivalent to embracing a particular set of policies’.

Nasa director Charles Bolden concurred. ‘Earth science has been an uphill battle for us,’ he recalled. ‘We have gone into the jaws of the tiger, if you will, and we have tried to find mostly allies on the Republican side of the aisle.’ He said this is particularly important given the impending transition from one administration to another after the November election.

Holdren also recounted how international cooperation in science and technology is extremely important but becoming ‘immensely difficult to fund’ because of mounting apprehension in some quarters that such activities will compromise the US’s global competitiveness. Nevertheless, there are many indicators of the increasing global dependence on science. Cordova pointed to recent NSF data that reveal collaborative authorship of published research has increased, and these collaborations are frequently international.