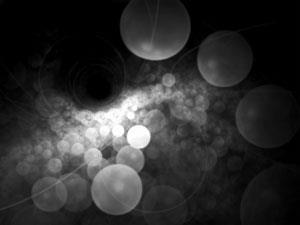 Nanobubbles shouldn’t exist, but they do. These little blobs of gas, too small to see in most optical microscopes, sit on submerged surfaces for days, defying the expectation that their high internal gas pressure should make them dissolve in an instant. Several explanations for nanobubbles have been proposed, but a new one claims to introduce no extra hypotheses, relying only on the observational evidence.1

Nanobubbles have been proposed as the origin of a long-range attraction between hydrophobic surfaces, which might have biological implications. They are also formed as gas is evolved at electrodes during electrolysis, and they might provide a way to load porous solids with high volumes of gas. All this makes it worth understanding why nanobubbles persist.

Detlef Lohse of the University of Twente, the Netherlands, has previously suggested that they are actively replenished by dissolved gas adsorbed on the solid’s surface.2 Now, Lohse and Joost Weijs don’t even need that idea. They say that the anomalous stability of nanobubbles comes from the slow rate of dissolution of gas into a surrounding liquid already saturated with it.

‘The bubble can’t dump its gas at microscopic distances because the liquid is supersaturated,’ says Weijs. ‘First, some room has to be made. This involves macroscopic transfer of gas through the entire liquid.’ As a result, the rate of dissolution calculated by Weijs and Lohse depends on the thickness of the liquid layer, and can run to many hours rather than fractions of a second.

The dissolution is slowed down further by the fact that the edge of a nanobubble – the ‘contact line’ where gas, liquid and solid meet – is typically ‘pinned’ in place, and doesn’t move as a bubble gets smaller. The reason is unknown, but it’s an experimental fact,3 analogous to the pinning seen for liquid drops on surfaces. ‘The pinning effect provides a negative feedback for the bubble dissolution process,’ explains Weijs. ‘As the bubble drains it becomes flatter, reducing the curvature, which in turn leads to a reduced internal pressure – the driving force for dissolution.’

Physical chemist Vincent Craig at the Australian National University in Canberra suspects that this won’t be the last word. ‘The theory wouldn’t explain the stability of nanobubbles produced by electrolysis, where it is unlikely that significant supersaturation occurs,’ he says. ‘Also, they predict the bubbles should be steadily shrinking over time. But as far as I know nobody has seen that – although with pinning it might not be obvious. An obvious experiment is to measure nanobubble volume over regular intervals and compare this to the theory.’

Another nanobubbles expert, Xuehua Zhang at the University of Melbourne, Australia, agrees that the negative feedback from pinning of the nanobubble edges, which she and her coworkers have just reported,3 could significantly slow down gas escape. She believes that Lohse and Weijs should now also test their idea by monitoring bubble size and shape for different levels of water.