Why the kilogram is changing forever

The end is nigh for the kilogram as we know it, or at least how metrologists – scientists who measure things for a living – know it.

Later today, representatives of the 60 metre convention states will meet in Versailles, France, and vote on whether we should bid a fond farewell to the old SI base units’ definitions. The overhaul will do away with the kilogram artefact, the last remaining object to define a unit and introduce a metric system described in terms of universal natural constants.

Currently, the weight of the kilogram is decided by the mass of le grand K, a 129-year-old platinum–iridium cylinder that sits under several nested bell jars at the International Bureau of Weights and Measures in France: if it changes in any way, the unit changes with it.

Comparing le grand K’s weight to that of its 67 copies has revealed that the copies’ masses have drifted apart over the years, possibly because they have accumulated tiny amounts of air pollutants. This makes it likely that the kilogram artefact itself has also changed – but we’ll never know, since the kilogram will always weigh, by definition, exactly 1kg. The kilogram is therefore being redefined to stop this drift.

What will the kilogram’s definition be?

Metrologists decided to base the SI units’ new definitions on the most stable thing in the universe: natural constants. The kilogram will be described by the Planck constant, h (6.62×10−34m2 kg/s), a quantum mechanical quantity that, in a wider sense, relates mass to energy via E = mc2.

It seems to be clear that the kilogram needs a fresh start. But why change the other units?

The ampere, kelvin and mole also have problems. The ampere’s definition talks about current in ‘two straight parallel conductors of infinite length of negligible circular cross-section’. But infinitely long wires of infinitely small diameter is not something that everyone has just lying around in their lab. It’s more sensible to relate current to the electron’s charge, e. 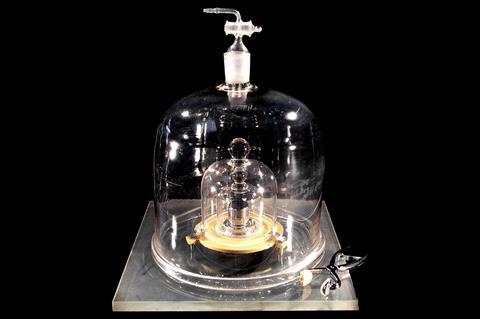 Both the kelvin and the mole rely on a single substance: water and carbon, respectively. After the changes, the kelvin will use the Boltzmann constant, k, which correlates a particle’s kinetic energy to temperature. The mole will get rid of its ‘as many elementary entities as there are atoms in 0.012kg of carbon-12’ definition. Instead, 1mol will simply contain Avogadro’s number (NA 6.022×1023) of particles.

The second and the metre will stay the same as they are already defined in terms of fundamental constants – an electronic transition with a caesium atom and speed of light, respectively. The unit for luminous intensity, the candela, is based on human perception and will also remain unchanged.

Will this change how heavy a kilogram is?

No. The world will still weigh the same (6×1024kg), whether expressed in the old or new kilogram. Only what exactly we mean by 1kg or 1mol will change.

Michael de Podesta, researcher at the UK’s National Physical Laboratory explained it like this: ‘The redefinition is kind of like having work done on the foundation of your house: you spend a lot of money doing it but afterwards, everything looks exactly the same because everything that’s been done is underground.’

But with a better foundation, things are less likely to break down in the future.

So does it make any difference in practice?

No, apart from in some special cases, for example high temperature measurements.

As long as the kelvin is tied to the triple-point of water at 273.16K (0.01°C), measuring very cold (below 20K) and very hot (above 1300K) things is tricky. Using regular standardised thermometers is out of the question.

At ultra-high temperatures, scientists measure an object’s brightness, compare this to the brightness of copper at its melting point (1358K), and then compare this with water’s triple point. Each step adds uncertainty. Working out the temperature directly, via the Boltzmann constant, is much more accurate.

How do the changes happen?

The key thing was to give the natural constants – h, NA, k and e – fixed numerical values. For this, they need to be measured as accurately as possible; otherwise, an old kilogram might end up lighter or heavier than a new one.

Scientists around the world have carried out sophisticated experiments, like the 1kg pure silicon sphere created to calculate NA and h. A strong competitor for the most perfectly round object in existence, if the sphere were the size of the Earth, the top of its highest mountain and the floor of its deepest valley would be separated by just 10m. The Avogadro sphere team managed to measure NA to an uncertainty of 12 parts per billion.1

Perhaps the least intuitive measurement is the one of the Boltzmann constant by acoustic thermometry. For this, a soundwave is sent through a container with helium-4 gas. Determining the soundwave’s frequency and wavelength when it resonates allows metrologists to work out the speed of the helium molecules and thus k.2

And what will happen to le grand K after all of this?

Although it will lose its title as the one and only kilogram, it will remain an important standard. But metrologists never rest and are already working on the next overhaul: the redefinition of the second. They hope it will be ready by 2026.

This article was corrected on 16 November 2018 to clarify the difference between mass and weight.

Thanks to Richard Davis from the International Bureau of Weights and Measures for helpful discussions.