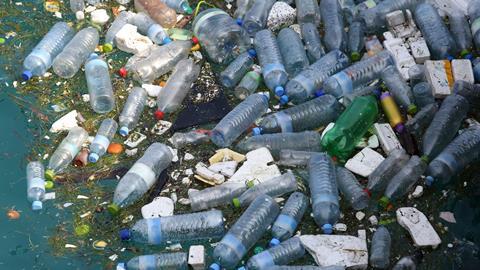 Over 190 nations have agreed to negotiate a legally binding treaty to tackle plastic pollution on land and sea, and one that will focus on the entire value chain to create a circular plastics economy. Agreement was also reached on creating a intergovernmental science policy panel to advise on chemical pollution and waste.

‘We still have a lot of homework ahead of us….. but the bottom line is we will eliminate plastic pollution from our environment,’ said Inger Andersen, executive director of the UN Environment Programme (UNEP). Work will begin later this year, with the aim of agreeing a treaty by the end of 2024.

The new chemical and waste advisory panel was inspired by international panels on climate change and biodiversity, and will tackle what’s been described as the third planetary crisis. Negotiators also resolved to step up efforts on the environmentally sound management of chemicals and waste – a target originally set for 2020 and not met, develop recommendations to reduce the environmental impact of mineral extraction and manage nitrogen waste, primarily from agricultural run-off. 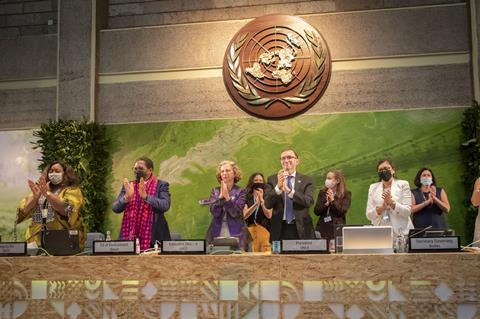 The International Council of Chemical Associations – some of whose members had reportedly lobbied for an agreement that focused on waste rather than the production of plastics – said it was ‘pleased with the outcome’. It noted that the resolution provides governments ‘with the flexibility to identify binding and voluntary measures across the full lifecycle of plastics, while recognising there is no single approach to solving this global challenge’.

Negotiators will have to tackle the thorny issues of goal setting and measuring outcomes, said Andersen. ‘We also need to bring [the] private sector into the room, because private sector after all, are the producers of plastics. We’ll need to talk about whether and how we measure the degree of circularity and we’ll need to have a conversation about whether we should have some goals for reduced raw polymer in the production chain.’ Treaty implementation, differing country capacities and financing must all be addressed, she added. However, she urged governments and companies not to wait for the treaty to be ratified to act on plastic pollution.

Camilla Alexander-White, chemicals policy lead at the Royal Society of Chemistry, welcomes the move to bring chemicals and waste together under one umbrella. ‘Up until this point, chemicals policy in terms of Reach and industrial production of chemicals, has been separate from waste policy. If you want to achieve a circular economy, then the two worlds have to come together.’

Critically, ‘science will now be at the heart of these discussions when there was almost nothing before. That’s a landmark change and so should be the stimulus for the targets [on chemicals management] to be met. In the past 10 years the world’s targets on pollution have failed to be met because industry have not been at the table and science has not been at the table.’

However, the science panel will have to navigate data sharing. ‘When you’ve got safety data, chemical data that is a corporate asset, how you then share that data with the wider world – especially on priority areas of global concern – will be a key issue,’ she adds. Industry scientists should be involved, ‘but make sure they’re not bringing the business agendas and the business plans to the table, but bringing their facts, their knowledge and manage any conflicts of interest transparently’.

According to the resolution passed this week its main functions will include horizon-scanning, undertaking assessments and ensuring communication between scientists and policymakers. Switzerland will provide CHF750,000 (£610,000) to help establish the panel. Alexander-White wants to see the UK government make an equivalent commitment ‘because we’re a leading player in this’.

Setting up the science policy panel will take until 2024. Bob Watson, a former chair of both the Intergovernmental Panel on Climate Change (IPCC) and the Intergovernmental Science-Policy Platform on Biodiversity and Ecosystem Services (IPBES) says the working group charged with setting up the panel has been given clear guidance on what’s wanted. ‘That’s superb – it really does sound like an IPCC or IPBES approach so they’re taking it very, very seriously.’ Questions remain about the scope of the panel and what its priorities should be. But first, ‘they’ve got to get the process, right. It’s absolutely crucial that governments all feel comfortable with the process – the private sector, the NGOs, all of the relevant stakeholders must have confidence in the process that’s going to be put together.’

Once established, Andersen does not expect the panel will ‘look at every chemical under the sun’ but to begin with those that have the biggest impact on human health and the environment. However, she adds ‘not all chemicals are waste, and not all waste is chemicals. So there’s quite a lot to be unpacked.’

Correction: The spelling of Inger Andersen’s name was corrected on 8 March 2022