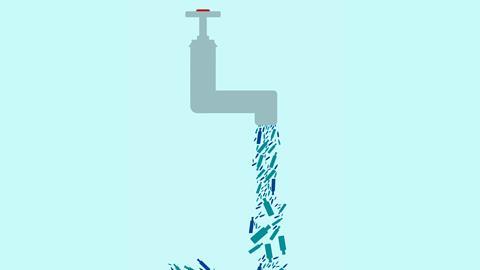 Turning off the plastic tap

A historic agreement has been reached on plastic pollution. 175 nations that met in Nairobi, Kenya, in March have agreed to come up with a binding treaty to tackle a problem that no one nation can address on its own. But how big is the problem of plastic pollution?

The figures for plastic waste are shocking. Seventy years ago production was relatively low, with 2 million tonnes of plastic produced in 1950. Today production is pushing towards 350 million tonnes per year and much of it is going into packaging, textiles and consumer goods that we all use. Yet despite recycling rates increasing to a little over 20%, the majority of that plastic (55%) is discarded with the remainder incinerated. The world isn’t coping well with that 55% it discards either. Models suggest that about 11 million tonnes of it is entering the world’s oceans every year and three-quarters of the plastic ever made is now waste.

The United Nations Environment Programme’s (UNEP) draft resolution concedes that there’s no one solution to the problem. To be sure, organised waste management collection systems will play a part. UNEP also goes out of its way to highlight that the informal waste management economy – waste pickers – will be important where state-run waste systems are inadequate. A significant reduction in plastic production is also desirable. Recycling and a circular economy are also on UNEP’s wish list, and this is where the chemical industry and chemists can shine.

There are clearly opportunities for conventional recycling technologies to reform graded plastics into new items. However, this tends to lead to a lower quality product than those made with virgin petrochemicals. The dream solution to the plastics that the world can’t do without would be depolymerisation technologies that can break polymers down into their constituent monomers cheaply and simply, which is why it features in our pages so often. A challenging task, but one that chemists are already rising to.

The next two to three years will be where the hard work really starts for negotiators from these countries. Getting 175 countries to agree on a wide range of binding measures to reduce, reuse and recycle plastics will be difficult. The excellent news is that they will be guided by top scientists sitting on a new international advisory panel that is being set up now and which is modelled on the Intergovernmental Panel on Climate Change. The first step has been taken and it’s time for chemistry to play its part in solving a problem that it has helped to create.