Device made from fullerenes, nanotubes and graphene could deliver 'high performance at a low cost' 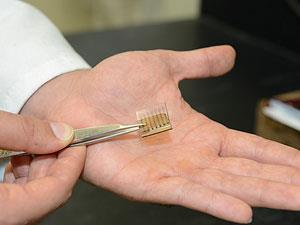 Researchers in the US and China have built a photovoltaic cell made entirely from carbon. The electrodes and light-active layers are made from a combination of three carbon allotropes – nanotubes, fullerenes and graphene. The efficiency of the prototype device is low, but the scientists say that this can be improved and that the potentially low cost and ease of processing makes an all-carbon solar cell an attractive proposition.

While fullerenes, graphene and single-walled carbon nanotubes have all been incorporated into solar cells previously, they have not been used together in an all-carbon device. ‘Carbon has the potential to deliver high performance at a low cost,’ says Zhenan Bao of Stanford University, who led the research team. ‘To the best of our knowledge, this is the first demonstration of a working solar cell that has all of the components made of carbon.’

The new cell consists of a light absorber and electron donor made from carbon nanotubes, together with fullerene – C60 buckyballs – as the electron acceptor. This light-active bilayer is sandwiched between an anode of reduced graphene oxide and a cathode of doped single-walled carbon nanotubes. All the components are processable from solution.

The prototype device can absorb light and generate electricity, but only at a modest rate. The power conversion efficiency – the amount of light energy converted to electrical energy under standard conditions – was measured at about 0.06%. This compares unfavourably with around 12% for dye-based solar cells and 25% for those fabricated from crystalline semiconductors. ‘We clearly have a long way to go on efficiency,’ Bao says. ‘But with better materials and better processing techniques, we expect that the efficiency will go up quite dramatically.’ 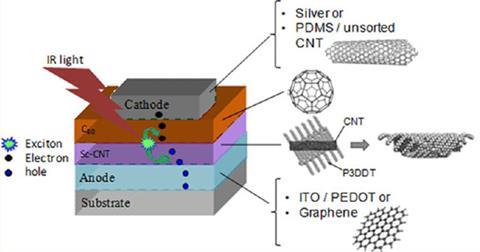 The new solar cell makes use of three allotropes of carbon

Henry Snaith, who leads the photovoltaic and optoelectronic device group at the University of Oxford in the UK says that the study demonstrates how carbon can do everything required in a solar cell – or at least function as a semiconductor and as a conductor where required. Snaith adds, however, that it is unclear why an all-carbon solar cell is needed. ‘We need solar cells to be cheap, stable and efficient. Carbon could deliver this, but so could many other materials. The most promising aspect of carbon, considered [to be] fullerenes, nanotubes and graphene, is that they can be extremely conductive and transparent at the same time, making them very likely candidates for transparent electrodes either on their own, or when combined as composites with other conductive materials. As electrodes, they could be employed in combination with any current solar technology.’