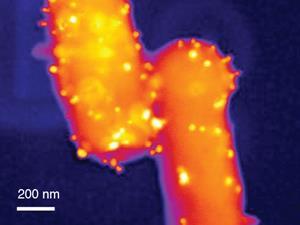 Researchers in India have turned bacteria containing metal-based nanoparticles into an extremely bright, x-ray emitting plasma. This opens up for the possibility of using engineered bacteria as x-ray plasma sources, which could significantly improve resolution in medical and molecular imaging.

X-rays are most famously used in medical imaging, airport security and to probe atomic structure. These x-rays are highly energetic and known as hard x-rays. Conventionally, x-rays are generated by firing electrons at a metal target, which then emits the x-rays. An emerging method, which can produce much brighter x-rays, uses a laser to turn particles into a plasma. Because the plasma is highly energetic and unstable, it emits x-rays. However, to work with the incident light of the laser, the particles that are to be turned into plasma must be of a similar size to the wavelength of the laser, which can be difficult to engineer.

Manchikanti Krishnamurthy from the Tata Institute of Fundamental Research faced exactly this problem when he tried to scale-up his experiment from the nanoscale. ‘A biologist suddenly said to me, why are you struggling? If you want a one micron particle, a bacterium is the simplest thing,’ Krishnamurthy says. Bacteria also have the advantage of being able to coat themselves in nanostructures, which help with absorption of laser light. ‘If you use bacteria, you can really increase the local fields very dramatically,’ says Krishnamurthy. ‘You get a much brighter source of hard x-rays.’

To produce Escherichia coli bacteria containing metal-based nanoparticles of the appropriate size the researchers grew them in a silver solution. The nanoparticle-doped bacteria were then irradiated with a laser, successfully producing an x-ray emitting plasma. Compared with bacteria that had no nanoparticles, this resulted in a 100-fold enhancement in the generation of hard x-rays.

In the future, Krishnamurthy would like to investigate bacteria with more interesting shapes than the smooth, ellipsoidal ones used in this experiment. However, because changing the structure of the nanoparticles will make controlling the plasma harder, differently shaped bacteria could be more dangerous to use. Bacteria with flagella, for example, would be like holding a lightning rod in a thunderstorm, Krishnamurthy says. ‘Some of these funny-shaped bacteria are not going to be very safe, so we are planning to set up a new experiment where we can scan the size and the shape of the bacteria,’ he says.

Bernd Schütte from Imperial College London, UK, who wasn’t involved in the study, is intrigued by the potential applications. ‘The multidisciplinary study links chemistry, biology and physics – the bright x-ray pulses may be applied for the investigation of complex molecules on an ultra-short timescale,’ he suggests.