A sensory tour of a chemical plant

The sights, sounds and smells of chemical creation 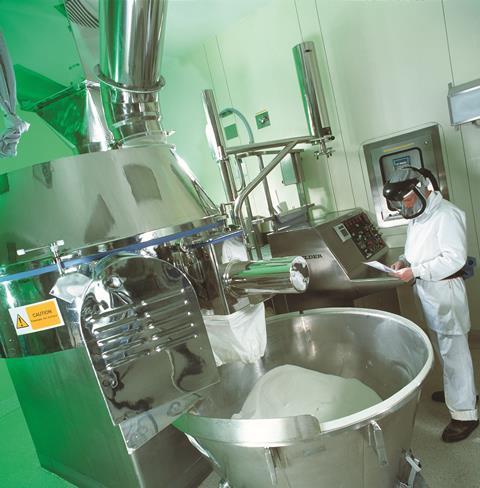 If you visit my company’s plant, I would be happy to give you a tour. While chemistry is a visual science, the joy of the plant is that it is so different to looking at your stirring reaction through a pair of safety glasses and a fumehood sash. The plant is big enough to be all-encompassing, a feast for all the senses, not just your eyes or nose. So, grab your safety glasses, here’s your hard hat (I got you one of the broad-brimmed ones, they’re very comfortable) and follow me through the big door. Please don’t touch anything, and don’t wander too far away from me.

First we’ll go into one of the warehouses, with its rows of sacks and drums on wooden pallets. Happily, while the warehouse holds many tonnes of various chemicals, it’s not too smelly. It’s a sight to behold, with shelves reaching 4–5m in the air. You might be used to dealing with a jar, or maybe even a sack of sodium hydroxide pellets, but instead here’s a large plastic box (an Intermediate Bulk Container) that holds around 1000 litres of 50% sodium hydroxide solution. It’s about the size of a large kitchen table. If the process we’re running consumes enough base, we can drain one of those containers in a night.

Now we’ll walk past one of the large vacuum pump systems with its distinct throaty roar, and into the main building with most of the reactors. If it’s quiet you’ll hear the buzz of the fluorescent lights, and a couple of operators laughing while they work. Or maybe the whine of a forklift motor, lifting 200–300kg of starting materials to the top of the two-story area to be charged into the reactor.

Ah, we’re in luck! The operators are using one of my favourite pieces of equipment: the double-diaphragm pump. When you can’t rely on vacuum or gravity to charge solvent into a reactor, or move a reaction mixture from one vessel to another, this is the pump for the job. With its characteristic ‘chew-chew-chew’ sound, the two compressed air-driven pistons create a pulsing action sufficient to move hundreds of litres of flammable solvent in a matter of minutes, without the ignition risk of an electric motor. The operators are suited up, wearing fire-resistant coveralls and full-face respirators that quietly swish and hiss as they go about their work.

If it’s quiet you’ll hear the buzz of the fluorescent lights and a couple of operators laughing. Or maybe the whine of a forklift motor

While they’re working, I can reminisce about when I worked in a kilo-scale laboratory with two very tall reactors. Rather than load 50kg of powder by hand, I decided to create a slurry and pump it into the reactor opening, 2.5m in the air. It took quite a few experiments to find a concentration that our small double-diaphragm pump could handle without struggling and generating a very slow ‘chew [3 seconds] chew [3 seconds] chew’ sound.

Let’s move to the upper level, where you can stand amid the reactor tops and peer in through the sight glasses. You can glimpse the pumped solvent silently splashing into the reactor. Want to see the agitator spinning busily inside? Hit that button (it’s the only button in the plant that the operators allow me to touch). You might notice that the big driving motor doesn’t really make much noise when it is running.

Now, as the operators are finishing up the last drum of solvent, you can hear the pump pistons speeding up – chewchewchewchewchew – as some air, rather than solvent, makes its way through. That’s the cue to turn off the pump and move onto the next operation. We should move on as well, to the dryer room. There, we’ll see white-suited operators, with air-supply hoses hooked into their hooded coveralls. It’s hard for them to hear much other than the rush of air into the hood and their own breathing as they load the product into the dryers.

Here’s a passage between buildings that brings back a lot of memories. One rainy evening, I remember noticing a strong solvent smell here. I was relatively new at the time, so my senses were not immediately attuned to something being the matter. That said, I mentioned to one of the operators as I entered the building: ‘You know, it reeks of ethyl acetate out there’. He immediately walked out of the plant and found a rather large solvent leak. He sounded the alarm and the team commenced cleanup procedures to prevent any environmental contamination, while I made myself scarce in the hustle.

On the way back, we’ll circle back around to the warehouse, which has gigantic fans that keep the air moving. Now that the large doors are closed, the air going through the vents creates a beautiful and eerie whine that rather frightened and surprised me when I first heard it. Now, it’s a comforting, familiar sound that I like hearing when I visit the plant with guests – won’t you come again?