As glassblowing declines, chemistry cannot fail to be affected

In late 2010 a chemist needed a piece of glassware that didn’t exist. Stephen Hodge at Imperial College London was working on a new method for dissolving carbon nanotube anions and wanted to study his process using spectroscopy. The experiments required an inert atmosphere and two electrodes, so an ordinary cuvette wouldn’t do the job.

Hodge contacted a specialist glass manufacturer in the US and asked if they could make him an air-tight cuvette with four screw-topped glass joints. A few weeks later the piece arrived, but the initial design didn’t work quite the way Hodge had envisaged. When he contacted the company to enquire about making some minor adjustments they replied it would be no problem – but Hodge would have to mail the piece back and fork out $300 (£190) for their services. 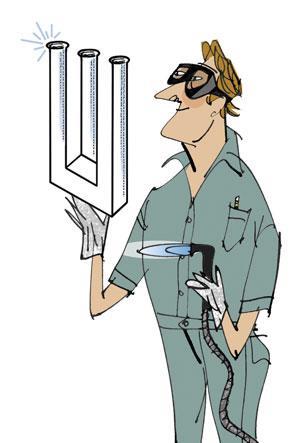 It was at this point that Hodge remembered his department’s resident glassblower and contacted him to ask for help. Hodge says communication and collaboration was much easier with the glassblower, Stephen Ramsey, because he was available in person. Soon Ramsey had crafted the bespoke apparatus, and the episode ended happily when Hodge’s study was published earlier this year.1

Ramsey has been a glassblower for 45 years and has spent time in industry and academia. Glassblowers are important, he says, to keep Schlenk lines running smoothly and to repair essential pieces of glassware. But he also makes special pieces and one-off prototypes that he tweaks in collaboration with scientists until they get it right. Chemists may have the ideas, but without craftspeople like Ramsey, they could not try out new pieces of science involving innovative glassware.

Another Imperial chemist, Andrew Ashley, keeps a Toepler pump running in his lab, one of only a handful left in Europe. The mercury piston pump, invented in 1850, is so intricate that an on-call glassblower is required to keep the apparatus working. Yet few chemists think so carefully about the glass apparatus they use. For many, glass is a useful tool but not something that needs much thinking about.

In the last 50 years, philosophers of science have been at pains to point out how external forces contribute to the growth of scientific knowledge. One in particular, French sociologist  Bruno Latour, emphasised the role that simple objects play in keeping science ticking over. Latour described science as a network with objects and ideas, as well as individuals, at its nodes. Latour thought that scientists rarely recognised this fact, writing in 2005 that objects are ‘nowhere said but everywhere felt’.2

Latour may not have captured the essence of science perfectly, but glassware is obviously essential to the continued success of chemistry. Academic chemists, however, are not investing in the future of glassblowing. There are only three apprentices based at UK universities according to the British Society of Scientific Glassblowing (BSSG) and there are no educational institutions that still teach the craft. Industrial glassblowing is in a similar state: the BSSG has just four student members based in industry. And while specialist contractors do exist, Hodge’s experience shows that their services are less than ideal.

Although glassblowers operate on the margins of science, it would do science harm if their decline went unnoticed. After all – like running a good column – glassblowing is a craft that takes practice to perfect. Ramsey, who left school at 16, was an apprentice glassblower for 10 years. Now, nearing the end of his career, he regrets that he has no apprentice himself. When he begins enjoying his hard-earned retirement, who, we wonder, will replace him?