In situ with Alán Aspuru-Guzik

The quantum computing guru reflects on his childhood in Mexico, why he left the US for Canada, and how professors are like vampires 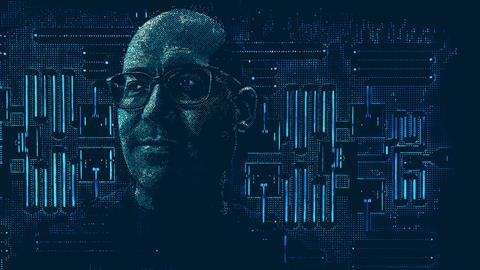 Alán Aspuru-Guzik is a professor of chemistry and computer science at the University of Toronto. His research is focused on revolutionising chemistry using computer science. He has received the Darpa Young Faculty Award, the Sloan Research Fellowship, and MIT Technology Review named him a top innovator under 35

I grew up in Mexico City as the son of an electrical engineer and a psychoanalyst. My brother and I liked computers and we used them for all kinds of things, like communicating with friends, very early on. In 1992, we got our first modem and we set up a Bulletin Board Service (BBS) – one of the systems that people called into. Ours was called Nopal BBS, which means cactus, and it was quite popular. It was a pretty fun way of getting into the computer world and growing my first ‘business’ with a group of people – not dissimilar to running a research group or a small start-up. That led me to have a complicated decision about whether to study chemistry or computer science when I was about to enter college.

When I was a kid, I went to the International Chemistry Olympiad in Norway to represent Mexico. That made me realise that we live in a global world, and it encouraged me a lot and helped me to lean towards chemistry. During my career, I kept thinking about chemistry problems that can be solved using computers. For example, I was obsessed with how computers solved the Schrödinger equation. I got into quantum computing in my postdoc, and then I got into machine learning. Finally, when I moved to Toronto, I was dually appointed in chemistry and computer science, solving the paradox that I had faced when I was 18, at the age of 41. So that’s pretty cool.

My first car was a 1988 grey Volkswagen Beetle, my grandfather sold it to me. He of course gave me a discount. I used some money that I got from a fellowship to buy the car, and drove it around Mexico City. My girlfriend at the time lived pretty far away, so it was an extremely useful tool for falling in love. I had that car about three or four years, and then my brother and I – he also had a VW Bug – pooled our resources, sold our two cars that were falling apart, and bought a car that we called ‘El Fronterizo’, or ‘The Border Car’. It was a very large, 1986 cream-coloured Ford Thunderbird. The only problem was that its fuel gauge didn’t work so to find out if you had gas or not you had to suddenly brake and listen for it sloshing back and forth. I sold that car to get the money to move to the US and do my PhD at UC Berkeley. El Fronterizo became a plane ticket.

I have two children – a nine-year-old and a six-year-old – who I love to hang out with. They are an endless source of energy. I also like to run marathons. Sometimes I go with my group members, sometimes I go running with my little six-year-old who likes to run. I find that a very good way of putting my mind somewhere else and concentrating on nature and my body and the world, and not just science.

I now live in Toronto, Canada, and am very happy here. It is a very diverse city, one of the most cosmopolitan places in the world with more than 100 languages spoken. It is a great place for my kids to grow up. I moved here due to my growing dissatisfaction with the political climate of the US. There is a war between the left and right, and different ideas of how we should be living. It is not a dialogue anymore, it is open warfare, and I am very disappointed about how democracy is unfolding in the US. So, I decided to just vote with my feet and contribute my scientific talent somewhere else.

My favourite place to work is in a meeting room with a grad student or a postdoc, sitting in front of a blackboard discussing some exciting scientific project or idea. That is when time can fly, and I can spend hours. Recently I have done less of that because the bureaucracy of moving to Toronto has been quite heavy, but I’m looking forward to going back to my roots of spending entire afternoons with back-to-back meetings with my students. We professors are a little bit like vampires that feed off the enthusiasm and energy of our graduate students and postdocs.

Science is at a crossroads. With the rise of the nationalist forces, and of course the political polarisation that we are seeing, I really hope that science is not caught between these rifts. We need science now more than ever to help solve the problems that we are facing, to pursue basic research, and also to educate people on how to think about and solve problems in a rational way.