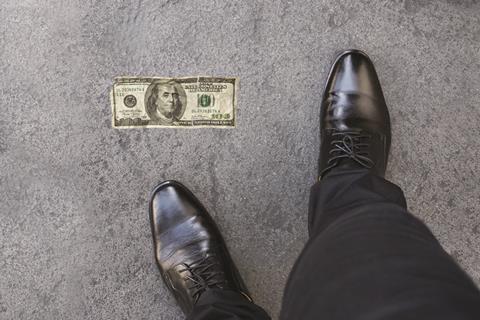 ‘If that were a real $100 bill, someone else would have picked it up by now’

Have you heard the one about the economist walking down the street with a friend? They come upon a $100 bill on the sidewalk, and the economist just keeps walking. ‘Aren’t you going to pick that up?’ asks his friend. ‘Don’t be silly’, comes the answer. ‘If that were a real hundred dollar bill, someone else would have picked it up by now.’

OK, the one about the statisticians on a hunting trip is probably a better joke. But like all the best jokes, it contains a seed of real, observed behaviour. And chemists are just as prone to the same kinds of irrationality. Instead of large-denomination bills, though, we’re walking past scientific inspiration. Readers who have worked in large organisations may already be anticipating this part, because they will have heard variations on the question: ‘If this is such a good idea, why isn’t someone else doing it already?’

That’s a surprisingly hard one to answer intelligently. An accurate (but rather weak-sounding) response is that someone has to think of something for the first time. The unspoken rejoinder to that one is: ‘What are the odds (especially since it’s you who came up with this?)’ But no other answer seems to do much better: ‘Well, maybe someone is working on this right now,’ is just as unprovable, until it’s too late, and: ‘If we thought that way about everything, we’d never discover anything’ is all too accurate, but comes across rather harshly. The problem is that you’re being asked to prove a negative, which is not going to happen.

What can be even more frustrating is that this attitude seems to coexist, in some places, with the famous ‘not invented here’ mindset, where new ideas and techniques don’t get taken up as quickly as they should, simply because they came from somewhere different. There are few better proofs of the ability of people and organisations to carry around near-contradictory ideas simultaneously than the combination of ‘this idea is suspect because it wasn’t invented here’ and ‘this idea is suspect because it wasn’t invented somewhere else’. That doesn’t leave you a lot of room to work.

Having seen both of these in operation many times, I’m willing by now to call them problems of human nature. If that’s true, then it means a frontal assault in the ‘let me explain to you how you’re wrong’ style is absolutely hopeless. If that’s the situation you’re facing, your best hope is to sneak up on the problem. In both cases, the person you’re dealing with has probably been burned, quite possibly more than once, by the sudden imposition of a wonderful new plan that left everything noticeably worse than before. So, ‘here’s this great new idea I had’ and ‘here’s this great new idea someone else had’ sound roughly the same – they both herald another big change, promulgated by some hotshot, that’ll never really work out. ‘Wouldn’t it be better to stick with what you know?’ is what they’re feeling, in either case.

The solution might be to make the idea you’re proposing seem less impressive than you might hope for it to be. If you can make it sound more incremental, more like what people are familiar with, you might not set off those same alarms. If your idea really is a good one, it’ll prove itself eventually by delivering those great results you’re hoping for, but you don’t have to talk about them up front if it’s going to scare your audience. Save that, at the very least, for your fellow visionaries, and don’t assume that anyone falls into that category unless you’ve seen them in action. It can be hard to maneuvre in the landscape that lies between ‘not a threat’ and ‘not interesting’, but it’s worth the effort. It’s most definitely human nature to react to threats, and if you (and your scheme) get classified as one (as a threat to peace of mind, if nothing else), then you’re going to find it hard to get anything to happen.

Oh, and those statisticians? There are three of them together when a bird flies over. One fires and misses to the left. The second fires and misses the same distance to the right. ‘We got him!’ shouts the third…