If you try to picture shambling humans, seemingly powerless to think or act independently, you probably think of zombies. The reality is more frightening: these are the symptoms exhibited by victims under the influence of scopolamine.

Scopolamine’s history is the stuff of legend, urban myth, legitimate medical use, and – unfortunately – crime statistics. A naturally occurring alkaloid found in certain genera of the Solanaceae (nightshade) family, scopolamine is routinely prescribed to treat motion sickness. In recent years, scopolamine has garnered increased media attention as a predatory drug associated with drug-facilitated crime, which has been used to subdue, manipulate and violate people. ‘Scopolamine has its roots in witchcraft, zombies, crime, murder, and a top-secret CIA programme,’ wrote Justin Brower, a forensic toxicologist that blogging at Nature’s Poisons. Like many other chemicals, scopolamine can be medicine or weapon. Both roles result from its biochemistry.

Scopolamine (also known as hyoscine) is classified as an anticholinergic agent. According to the National Institutes of Health, this class of drugs ‘decrease or block the actions of acetylcholine on its parasympathetic nervous system receptors on smooth muscle cells, glands and the central nervous system.’ Their action on smooth muscle mean these agents can affect the gastrointestinal tract, bladder and lung and treat conditions in these areas that require modulation of muscular contraction. Certain anticholinergic agents, including scopolamine, can act as antiemetics and are used to manage nausea and vomiting in motion sickness, pregnancy, anesthesia and chemotherapy. 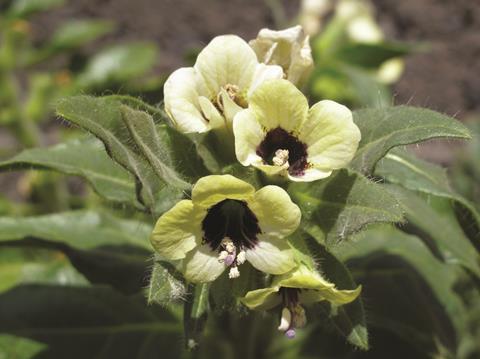 White henbane, part of the nightshade family, is one possible source of scopolamine

Scopolamine has hallucinogenic properties, which means it is sought after as a drug of misuse. It can also make someone subservient and obedient, along with impairing a person’s ability to store facts and events (declarative memory). Simply put, scopolamine can inhibit the creation of new memories of who, what, how, and where: a condition called anterograde amnesia.1

It is easy to see why scopolamine has been weaponised. Psychoactive substances, like scopolamine, ‘may alter the victim’s degree of consciousness, state of awareness, judgement and memory … can make the victim vulnerable and unable to fight off their attacker … they can be used to sedate the victim in order to facilitate easier transport by the perpetrator.’2 Scopolamine can also be delivered in multiple ways, with crime reports documenting it has been added to drinks, food and lotions or blown in victims’ faces.

As with the predatory drugs gamma-hydroxybutyric acid (GHB) and flunitrazepam (Rohypnol), scopolamine has been employed to commit drug-facilitated sexual assault (DFSA).2 It also features in drug-related robberies, with perpetrators taking ‘victims on the “million dollar ride,” during which victims submissively withdraw money from a bank machine’3 or making off with a victim’s cash, cards and goods. Scopolamine’s effect on memory ‘may lead to a delay in reporting the incident, if it is even reported at all.’2 This delay or non-reporting is understandable and, unfortunately, has revealed a major analytical challenge: the clock.

Predatory drug detection is an active area of forensic research, and techniques including high performance liquid chromatography (HPLC), gas chromatography, capillary electrophoresis and mass spectrometry have all been used, as well as presumptive tests. The challenge is that scopolamine, as with many other predatory drugs, may only be detectable in bodily fluids – especially urine – for short times. While this period depends on the drug (and dose) used, sample given and method of analysis, it typically varies between one to five days.2

Aiming to boost detection rates for scopolamine, researchers at the University of Murcia in Spain recently took aim this drug’s metabolites.4 As the researchers note in Forensic Science International,4 targeting metabolites is a common approach in forensic drug analysis and expands the detection window for a variety of drugs – but had not, thus far, been applied to scopolamine.

The team looked for p-hydroxy-methoxy-scopolamine, scopine and tropic acid (the suspected metabolites of scopolamine) using ultra-high performance liquid chromatography-quadrupole time-of-flight tandem mass spectrometry (UPLC–QTOF–MS/MS). The team found all three metabolites in blood and urine samples taken within 24 hours of a positive test for scopolamine. Furthermore, they reported that ‘in the samples taken after around 48 hours, scopine was found in one case and tropic acid in both’.4

This work is promising, although more is required – a fact the researchers acknowledge. The team were unable to find any details of scopolamine’s metabolism in humans in the literature, and no metabolite reference standards were available. They also developed an entirely new method, and processing evidence will require validated processes if it is to lead to convictions. However, it may be a light at the end of the tunnel for those who have been victims of scopolamine – and a beacon for other analysts to improve our knowledge of how to detect assaults that use predatory drugs.

2 United Nations Office on Drugs and Crime, Guidelines for the forensic analysis of drugs facilitating sexual assault and other criminal acts, New York:UN, 2011