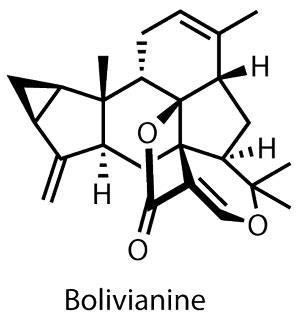 The still-growing and insanely diverse class of terpene natural products is probably responsible for a considerable number of undergraduate headaches (along with the cheap booze). Understanding how two relatively small isoprene groups can metamorphose into the varied range of monoterpenes such as menthol or citronellol is challenge enough, never mind the four isoprene units required for diterpenes like taxadiene or retinol. Slightly larger still is the recently unearthed (almost literally) bolivianine, a sesterterpene (five isoprene units) found in the bark of Hedyosmum angustifolium – and frankly, I wouldn’t know where to start.1

Handily, the isolation team has suggested a potential biosynthesis pathway, recognising elements of other natural products in its construction. Valérie Jullian’s group at the University of Toulouse, France, proposed that onoseriolide (a sesquiterpene found in the bark of related plants) could provide three isoprene units’ worth of the core, sharing the 3,5,6-carbocyclic system of bolivianine, while the remaining two isoprene units could be derived from ß-E-ocimene via a fairly lengthy biosynthesis.

However, Bo Liu and his team at Sichuan University in China have a slightly different take. They propose that this unusual terpenoid’s biogenesis hinges on an enzymatically catalysed Diels–Alder cycloaddition.2 While synthetic chemists have been combining dienes with dienophiles for over a century, the presence of a [4+2] cycloaddition in nature has been somewhat more controversial. Typical Diels–Alder type reactions generally require a significant thermal stimulus or a potent catalyst – neither of which were presumed possible in biological systems. However, recent findings seem to confirm the existence of a biological partner to the synthetic chemist’s favourite tool.3

Liu and his team begin their synthesis with yet another terpene – although a somewhat less exotic one – the commercially available (+)-verbenone. Four steps transform verbenone into suitable substrate for cyclopropane formation (figure?1), for which the team uses a rather unusual method. An initial plan to create the cyclopropane from an epoxide failed, so the team turned to a carefully controlled metallo-carbene intermediate to generate the three-membered ring, using the preferred boat-like geometry of the cyclohexane to control facial selection (figure 2). Inserting the carbenoid into the vinyl group creates not only the desired cyclopropane ring, but also a cyclopentane, generating the 3,5,6-tricyclic system in excellent yield.

After removing the ketal protecting group, the final five-membered ring is added using a typical furan formation. Oxidising the furan to a lactone completes the initial target, onoseriolide, in 12 steps.

It was then time to test the team’s biosynthetic hypothesis. Attempting a direct cycloaddition with onoseriolide and the favoured diene partner, ß-E-ocimene, failed. Even strong heating would not induce a reaction – a significant setback. After re-examining the system, Liu and his team decided that the electronic partnering may not have been ideal, and that a slightly elaborated onoseriolide might react. Happily, this worked in their favour.

Oxidising the alcohol attached to the recalcitrant furan produces an aldehyde, activating the furan for cycloaddition (figure 3). After this simple modification, adding ß-E-ocimene becomes highly successful, initiating a cascade reaction which creates three rings, four carbon–carbon bonds and five new stereocentres – quite a day in the lab! The cascade begins with a Diels–Alder reaction, which sets up an intramolecular hetero-Diels–Alder between the alkene at the other end of the ocimene and the a,b-unsaturated aldehyde. 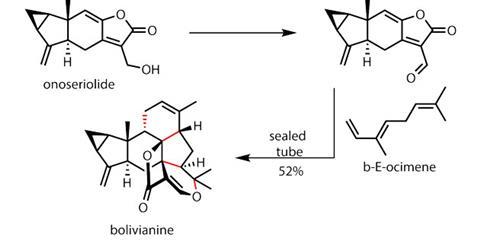 Further probing of the system with alternative dienophiles confirmed the reaction order, lending weight to the hypothesis that oxidation to the aldehyde is required – a proposal compatible with the team’s understanding of this biological system.

Completing the synthesis of a target as complex as bolivianine through traditional synthetic means is challenge enough, but using a biomimetic approach is both challenging and rewarding. The team has not only completed an extremely intricate target, but made an intriguing biosynthetic proposal more credible.