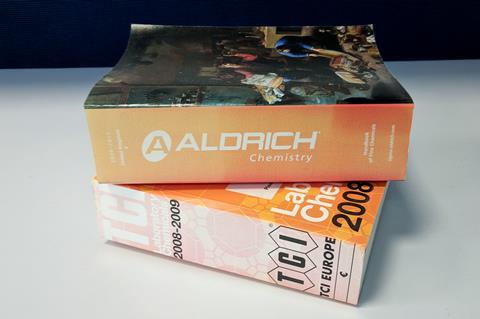 If you’re imagining all suppliers have massive warehouses full of every product in their catalogues, think again

If you’re an organic chemist, you almost certainly order reagents and intermediates from supplier catalogues. There are a lot of them, from big generalist companies that offer a bit of everything, though ‘building block’ companies with huge inventories of small molecules with built-in functional handles, down to small shops that specialise in one particular sort of reagent (or one particular sort of chemistry that allows them to make interesting compounds for sale).

It wasn’t always this way. There’s a long-out-of-print memoir memorably titled Excuse Me Sir, Would You Like to Buy a Kilo of Isopropyl Bromide, written by one Max Gergel. He founded Columbia Organic Chemicals back in the 1940s, when what’s now called the fine chemicals business was a lot smaller, and his book is an entertaining look at the old days of custom manufacturing. His tales will raise your eyebrows until they meet your hairline; it was a rough-and-tumble business. As the decades went on and the market expanded, things got marginally more genteel.

When you order a compound or reagent, it may be difficult to impossible to tell where it really came from

But it’s still an interesting landscape. There are broadly three types of suppliers: a few smaller ones who make almost all their own catalogue items; larger ones who make some of their own stock and contract out to others for the rest, or buy it on the open market; and those who make nothing by their own hands whatsoever. Some of the latter just resell things that they have lined up obscure supplies of, and some have large catalogues but no warehouses at all. That group will immediately back-order anything you request while they try to line up someone to make the stuff!

The complications become apparent. When you order a compound or reagent, it may be difficult to impossible to tell where it really came from. An extreme example is an alkaloid called sparteine, which is used in small amounts in chiral synthesis. It appears that someone isolated a very large batch of it for some reason (perhaps about 20 or 25 years ago) and nearly all the commercial sparteine since then traces back to that same drum, sold and re-sold in catalogue after catalogue. Eventually it was in short supply, and it turned out that no one was actually making it at all!

These days, most industrial chemicals trace back to producers in China and India. If you’re making some new compound at scale (a newly approved pharmaceutical, for example), you will need to have paid a great deal of attention to your supply chain. Finding reliable suppliers and locking them into production contracts is a specialised skill, and the people who do it don’t go around spilling their secrets. There can be many layers to the problem: intermediate A needs five steps to produce, and one of those steps needs reagent B, which it turns out is only actually made by two facilities in southern China, both of whom then depend on a stream of byproduct thrown off by yet another plant down the river that makes something else entirely.

Finding reliable suppliers and locking them into production contracts is a specialised skill, and the people who do it don’t go around spilling their secrets

World events can throw all this into disarray. The pandemic has, at various points, thoroughly disrupted supply chains in both China and India, of course. Economic shocks hit as well – for example, the solvent acetonitrile has over the years mostly come as a byproduct of plants that make acrylonitrile for the plastics industry, which itself rises and falls with automotive production. If demand for new cars dried up, acetonitrile tended to as well, becoming noticeably more expensive. The war in Ukraine has affected a very lively and useful industry there – supplying unique building-block intermediates for pharmaceutical drug discovery, as well as a lot of external contract synthetic organic chemistry.

So the world of chemical supply is far from straightforward, and it can be affected in unpredictable ways. The last two years have illustrated some of these, leading to attempts to make supply chains more robust. But that’s not a cheap process, nor a quick one (how long does it take to build a new fine chemicals plant, and where will you put it?) In the end, it’s a global business and will always be vulnerable to global concerns – of which we have plenty these days…